We took off from Cody around 5:30am.  The early morning light created a muted effect on the landscape as we drove. 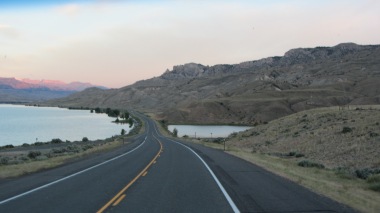 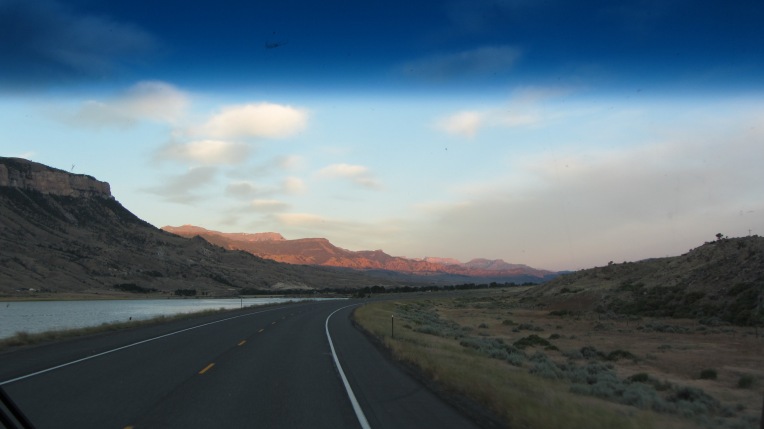 We passed through the park’s east entrance around 7am, greeted shortly thereafter by a bison grazing by Yellowstone Lake.

The only campground equipped to handle the size of our rig was Fishing Bridge.  We stopped in to inquire about a spot, but everything was full.  Besides driving back to Cody, our only option was to try to get through all of Yellowstone in one day.  Here’s how we did it! 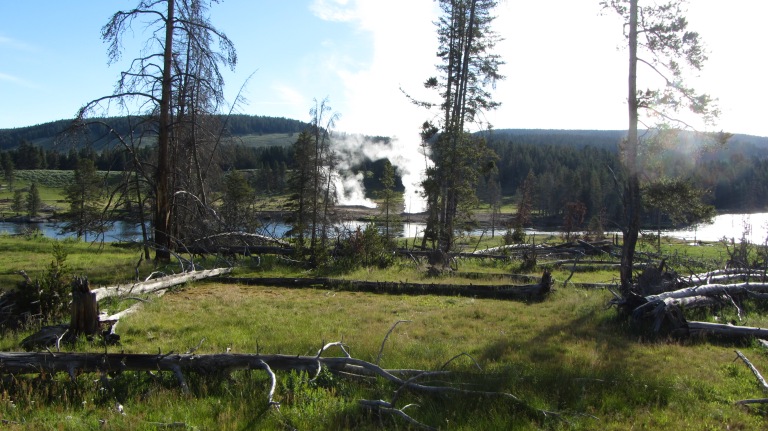 along with some geothermal features. 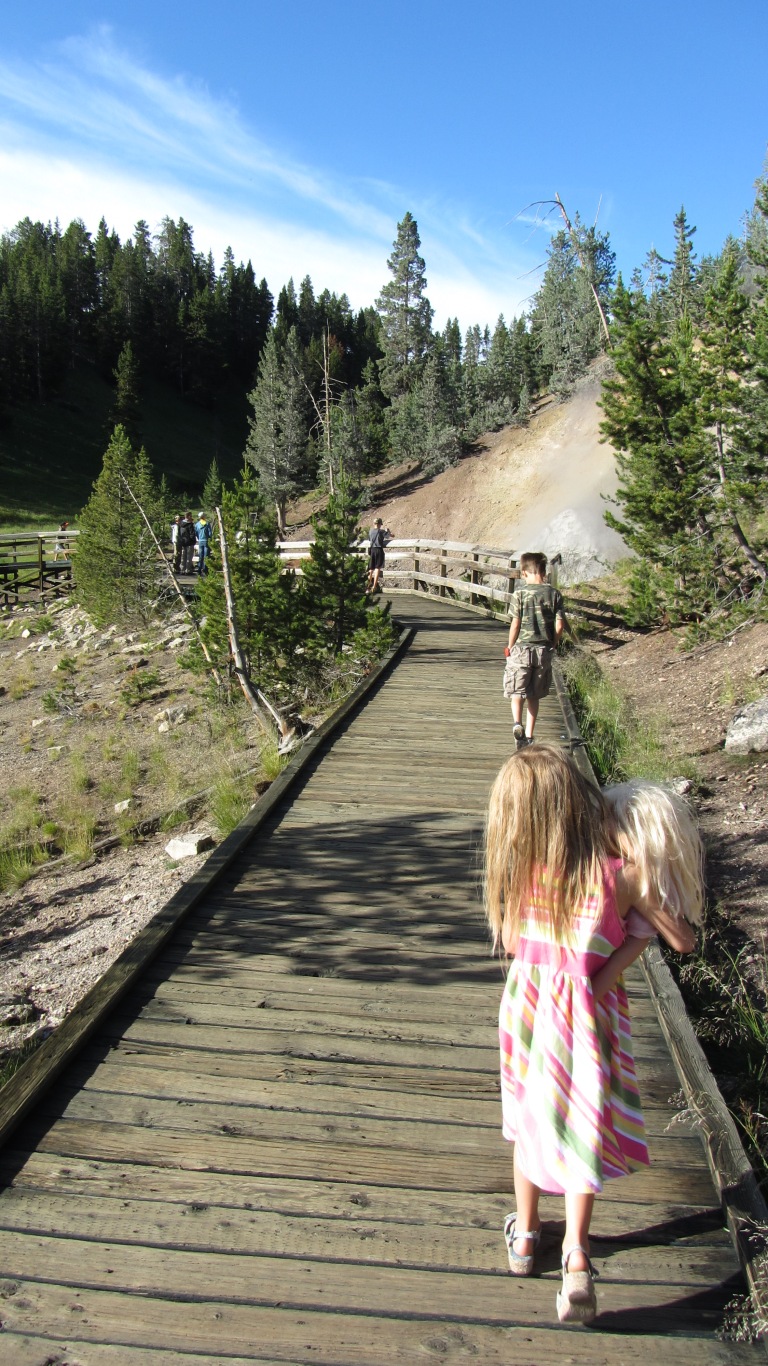 We gained altitude, arriving upon such pristine beauty!  When I opened my window, it crossed my mind that I should catch a whiff of Irish Spring soap!  It felt that fresh! 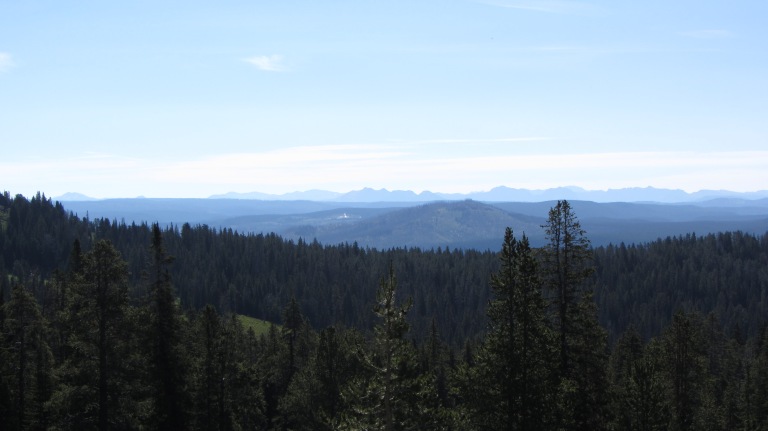 Cliff wanted you to see this…

We stopped frequently so that he could thoroughly enjoy the scenery as much as we were.  We sometimes hiked (although he couldn’t go far because he stubbed his toe in the Bighorn Mountains), 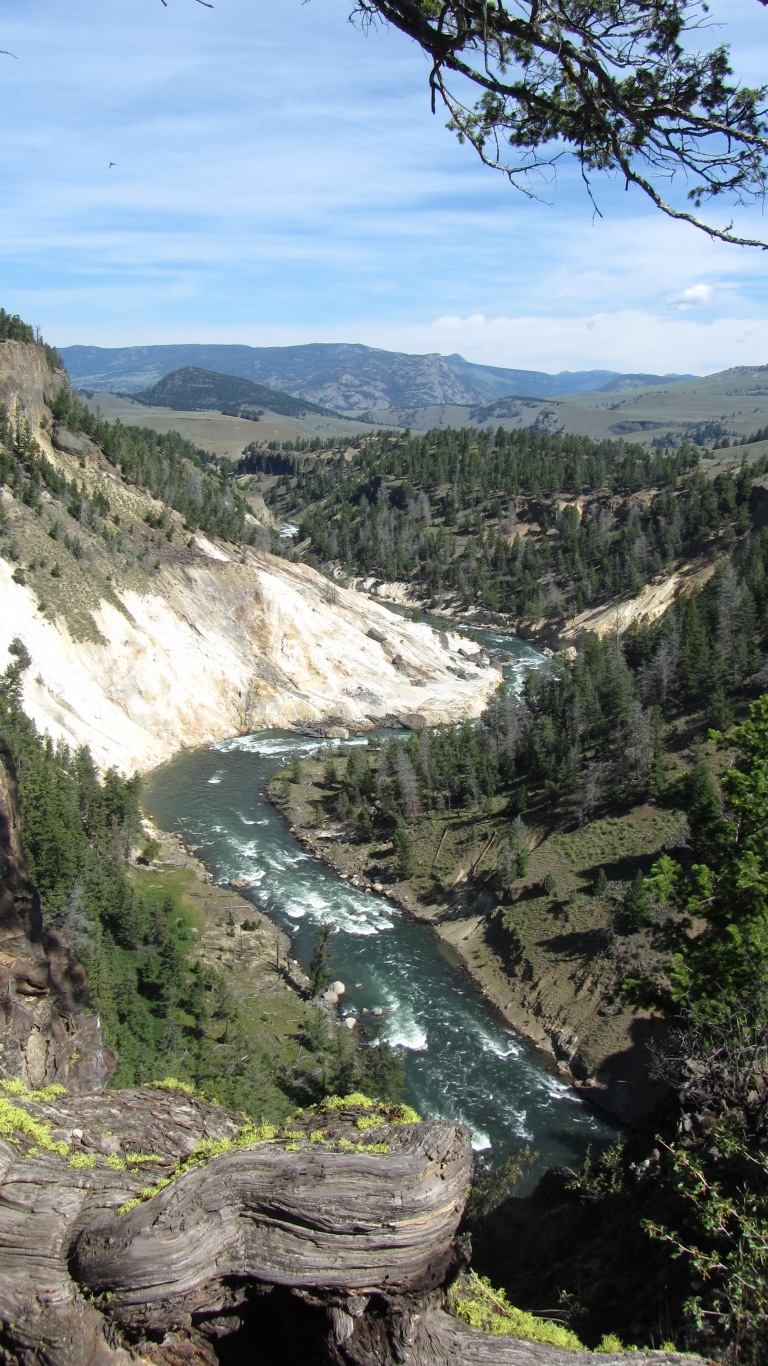 and experienced a waterfall. 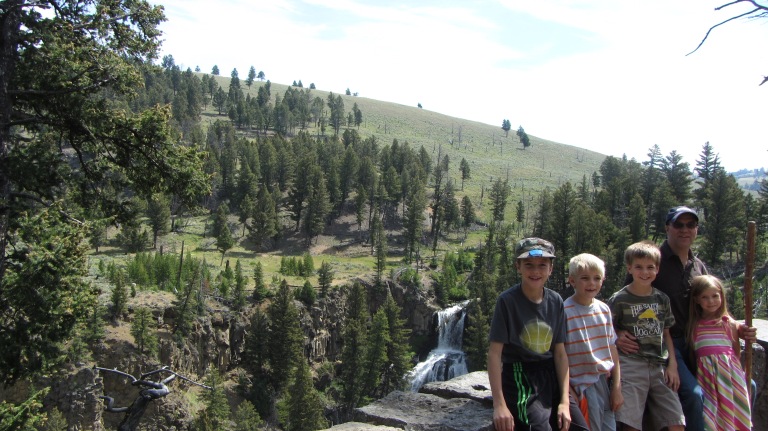 We stopped here, which made me want to run down this field of flowers like Laura Ingalls on TV!

A little bit of fun!  Cliff had the idea of taking a picture of me while I was taking one of the boys. 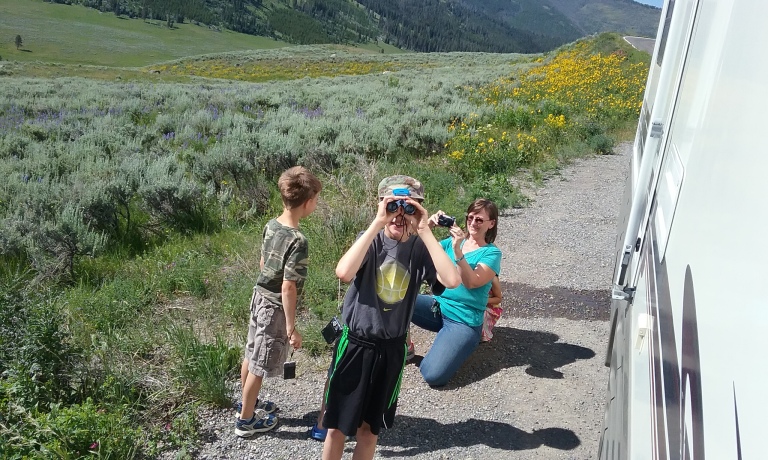 We exited the north entrance in order to say that we ate lunch in Montana! 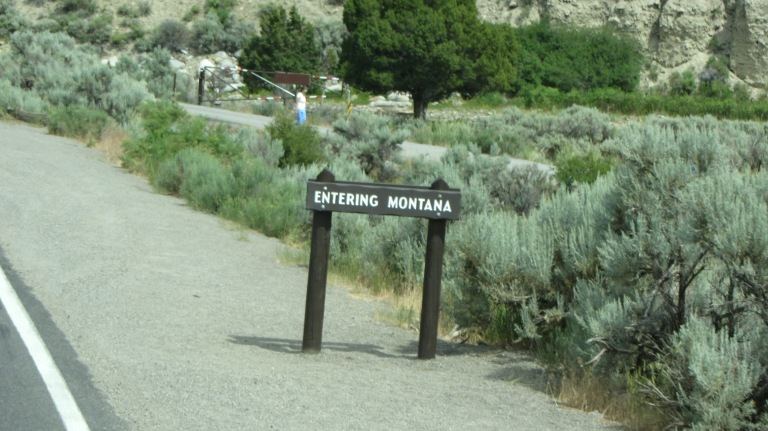 Obadiah, who is into wild foraging, discovered an edible cactus.

We also had an unexpected stop!

Time to head south, now.  After seeing the mineral springs

we ran into traffic, 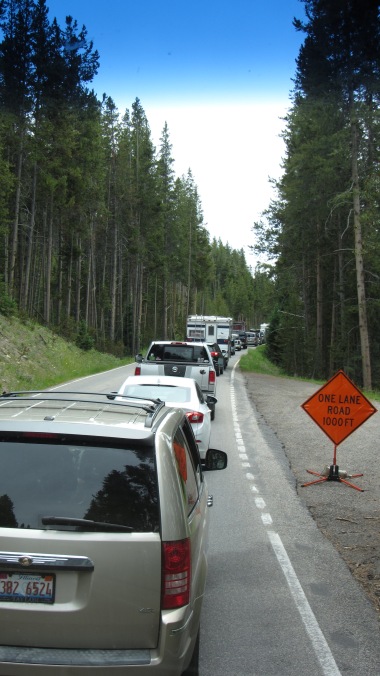 but it didn’t last long.  Soon we were on our way again.  Nadia discovered a dragonfly on one of our stops along the Firehole River.  Postcard caption: “I made a friend in Yellowstone!” 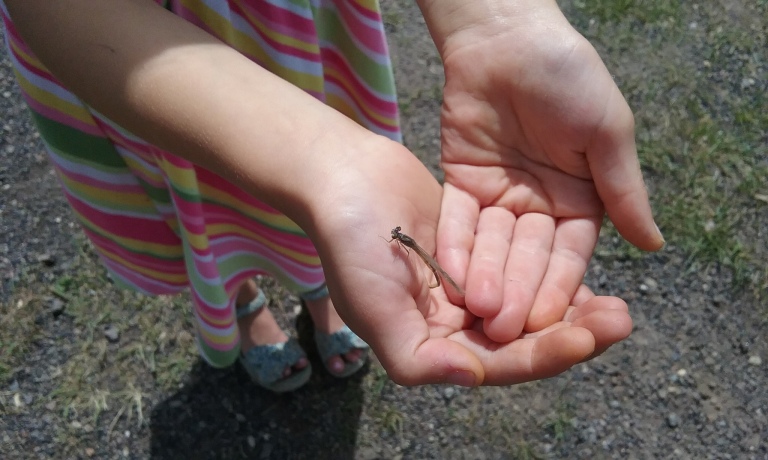 The area around the Grand Prismatic Spring was completely packed, so our walk was lengthy to view it. 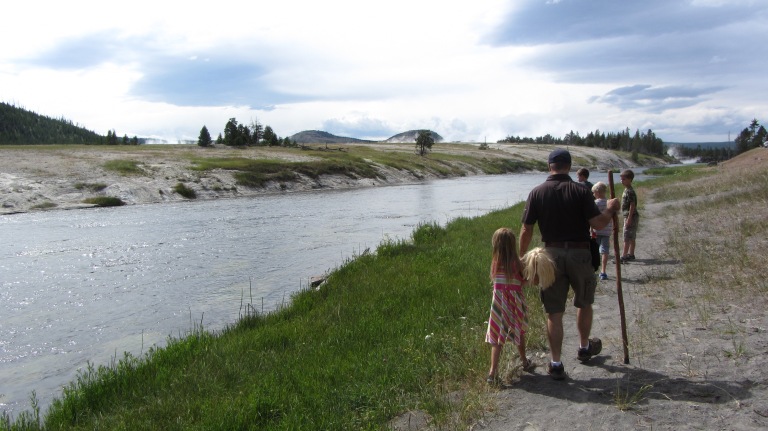 This was taken near the entrance to the Spring.  Our rig is slightly to the right of center, next to a tree. 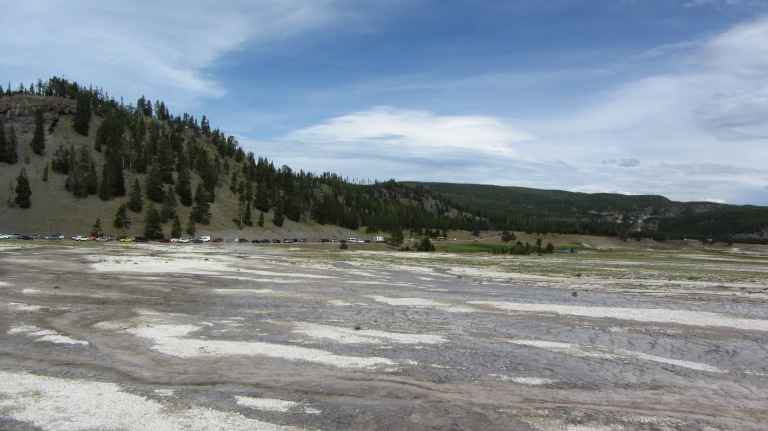 While there, we experienced much wind.

Because of the heat produced here, rushing waves of air burst upon us.  First hot and humid; next shockingly cold (the kids would say, “Brrrrrrrzy cold!”).  It literally took my breath away.

I’ve never experienced anything like it.  Kids were crying!  People’s hats were blown off, never to be retrieved again.

Nadia was so scared that her doll Rose would be blown out of her arms that she asked Cliff to carry her. 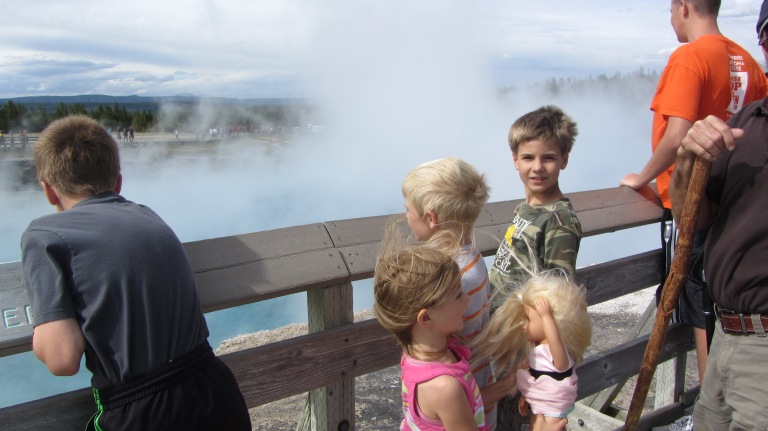 I couldn’t wait to get out of there because the narrow boardwalk was so crowded with people, moving in opposite directions in a helter-skelter way, all being tossed about by these bursts of air.

But, oddly enough, as we walked back to the RV, I thought that I was very glad that we toured it. 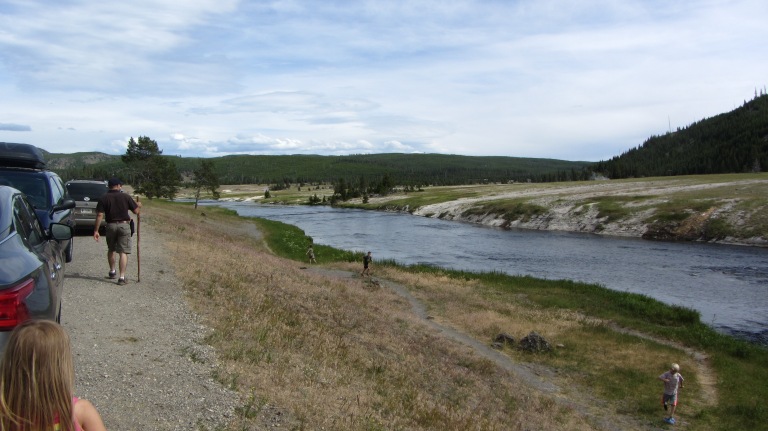 The last thing on our Yellowstone bucket list was Old Faithful, which was erupting just as we were finding a parking spot big enough for us.  We just saw the peak above the roof of the visitor center.  So we sat down and waited for the next eruption. 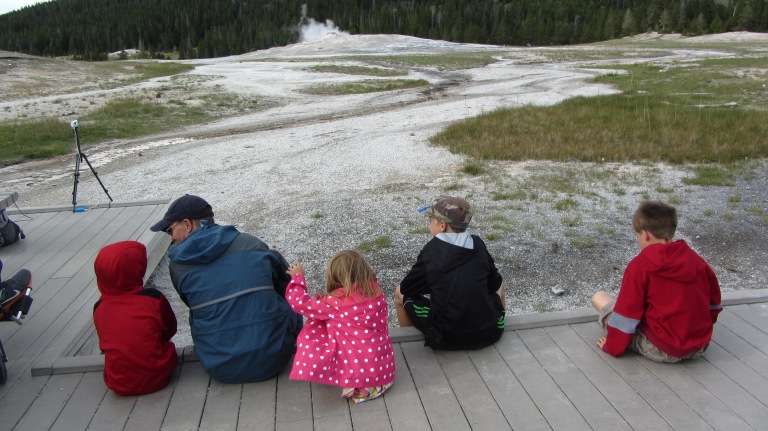 Just over an hour later, we caught the burst 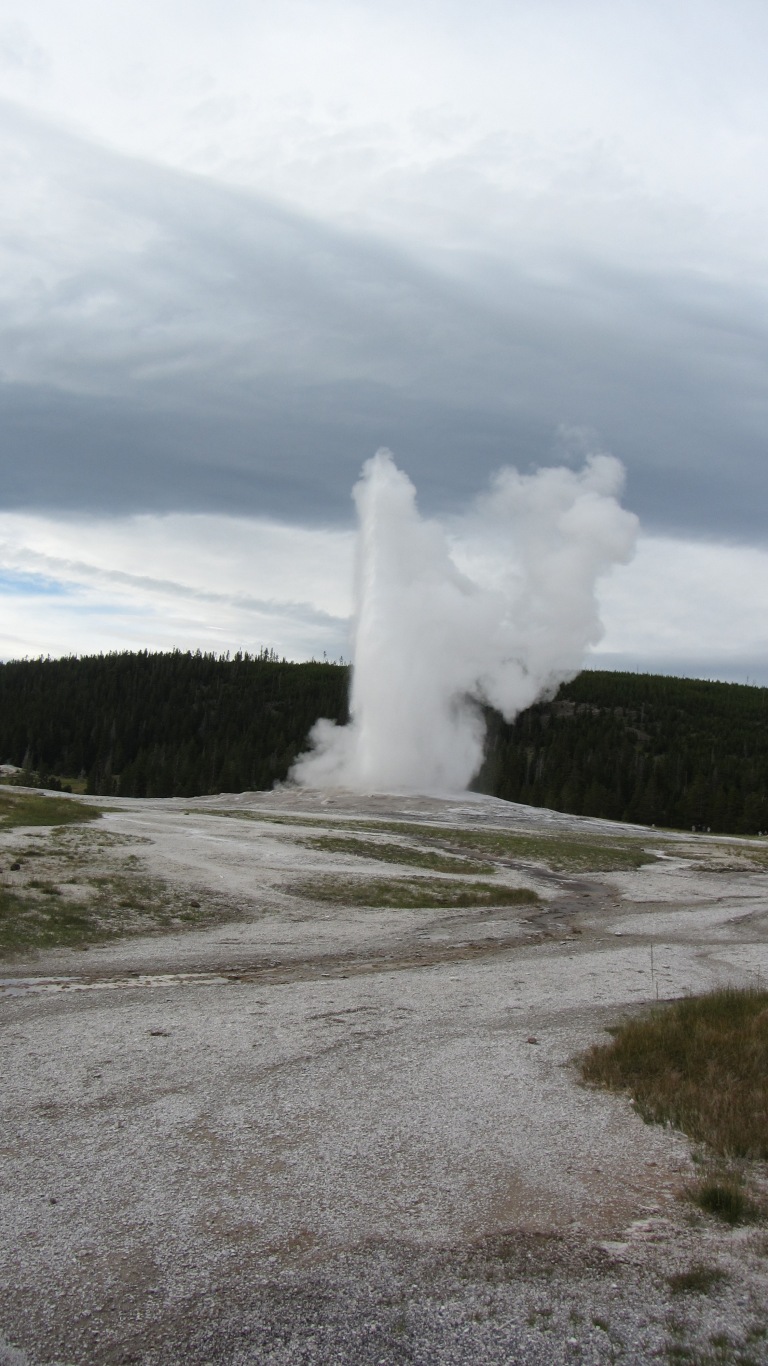 and headed toward the south entrance toward the Tetons, almost 14 hours after we had entered the park.  We caught a nice sunset on the way.

This was actually the straightest road we had seen in a long, long time!

But as sunset came, the fact that we were without a campsite for the night was heavy upon us.  We didn’t want to venture into an unknown mountain range after dark!  Thankfully, we found this gem of a place right between Yellowstone and the Tetons.

After we explained our situation, the management turned a blind eye to us, allowing us to park here for the night.  We crashed into bed, ready for a much-needed sleep after our long day!