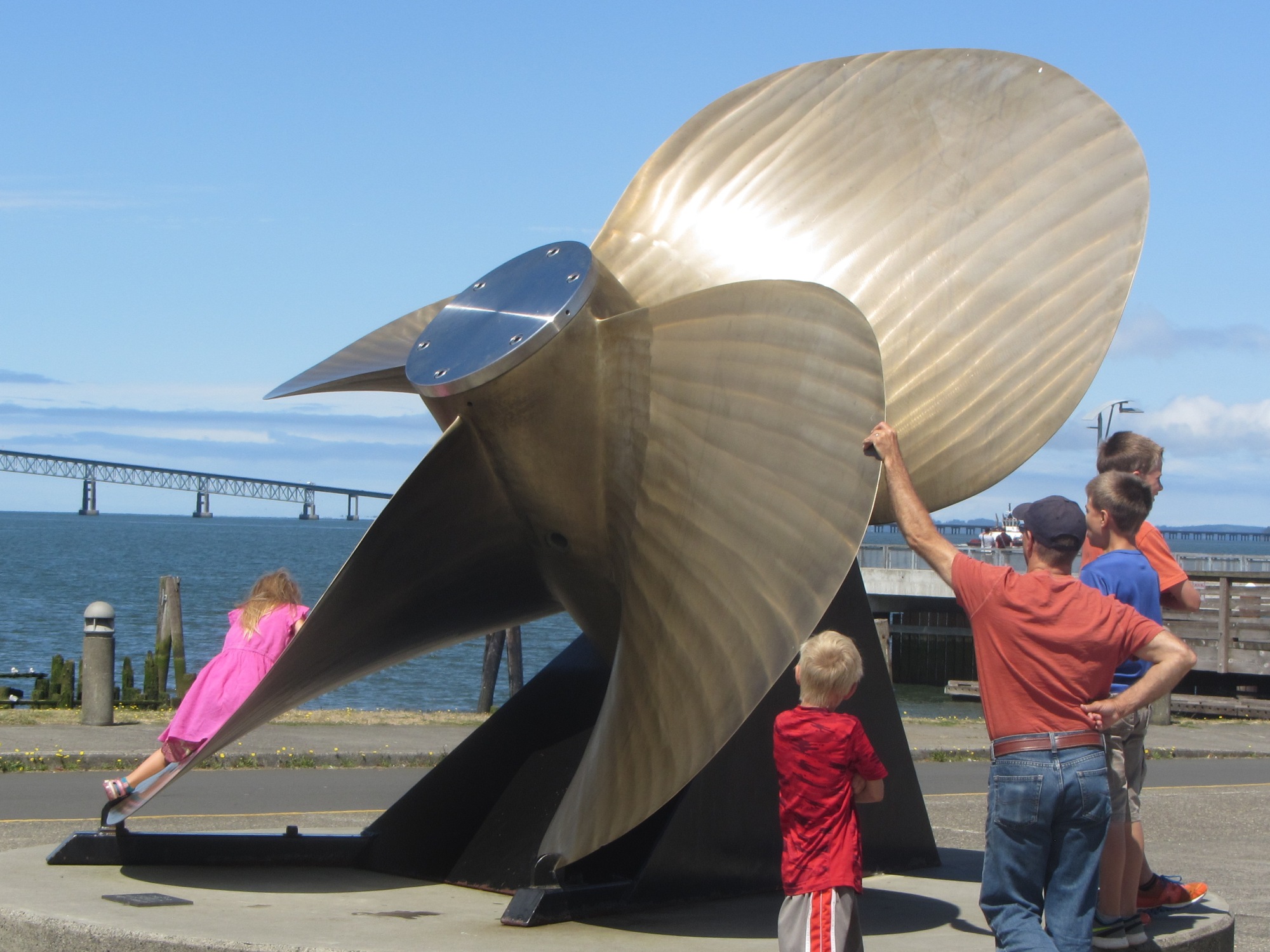 Believe it or not, after driving over 3,000 miles, this was the first time we made reservations.  (We had actually only stayed in campgrounds 6 total nights of our whole trip before we arrived on the coast!)   Even with reservations for 6 nights…we had to move to 4 different campsites!  This was one busy place!

Fort Stevens State Park.  On a tiny peninsula where the Columbia River enters the Pacific Ocean.  Where Lewis & Clark spent the winter before heading back home.  I think it is so much fun to look at on a map!

My pencil is pointing to a yellow square with a tree & tent on it.  That’s Fort Stevens State Park!  This map of it conveys a different aspect of being where we were.

After being at such high elevations throughout the west, we hit some pretty low ones here!

While we were setting up camp, a bird flew in our door and hit the window on the other side!  Cliff was able to capture it in a kiwi container so that we could release it outside.

The kids watched for awhile, and then it finally took off into the trees. 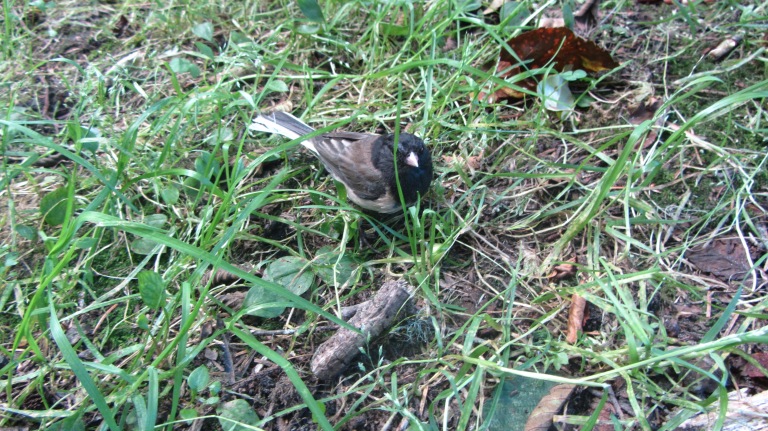 We hiked a trail our first afternoon.  Walking through unfamiliar forest landscape around Coffenberry Lake and onward to the Pacific, we encountered a heavy mist. 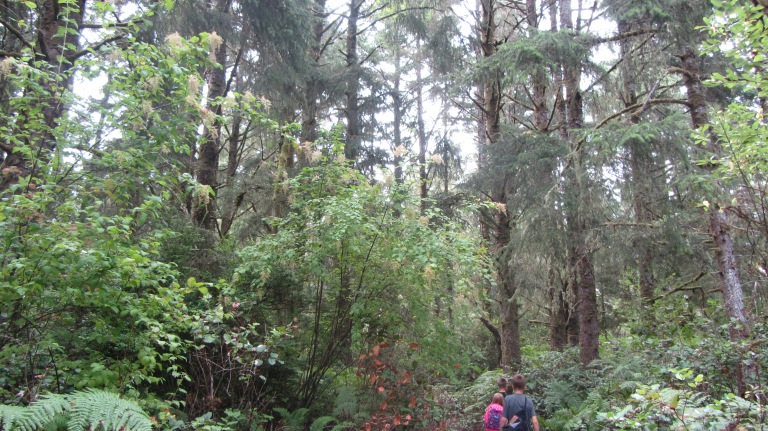 Damp but spirits undampened, we arrived to a windy welcome by the rusted wreckage of the Peter Iredale, a ship which ran ashore in the early 1900s. 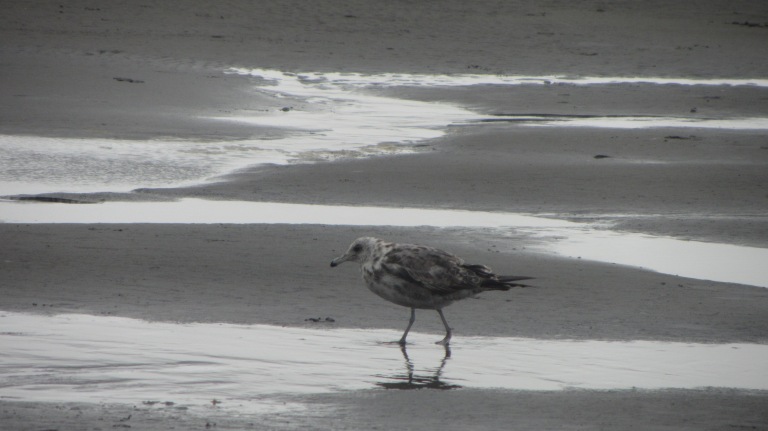 The walk home was invigorating, and it inspired us toward all we would do here over the next week.  We went back the next morning when the weather was a bit better. 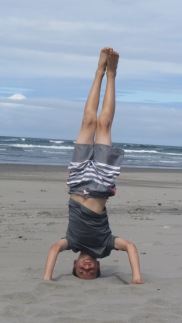 The afternoon was spent in Astoria at the Columbia River Maritime Museum, which showcased the fishing, shipping, and military history of the area. 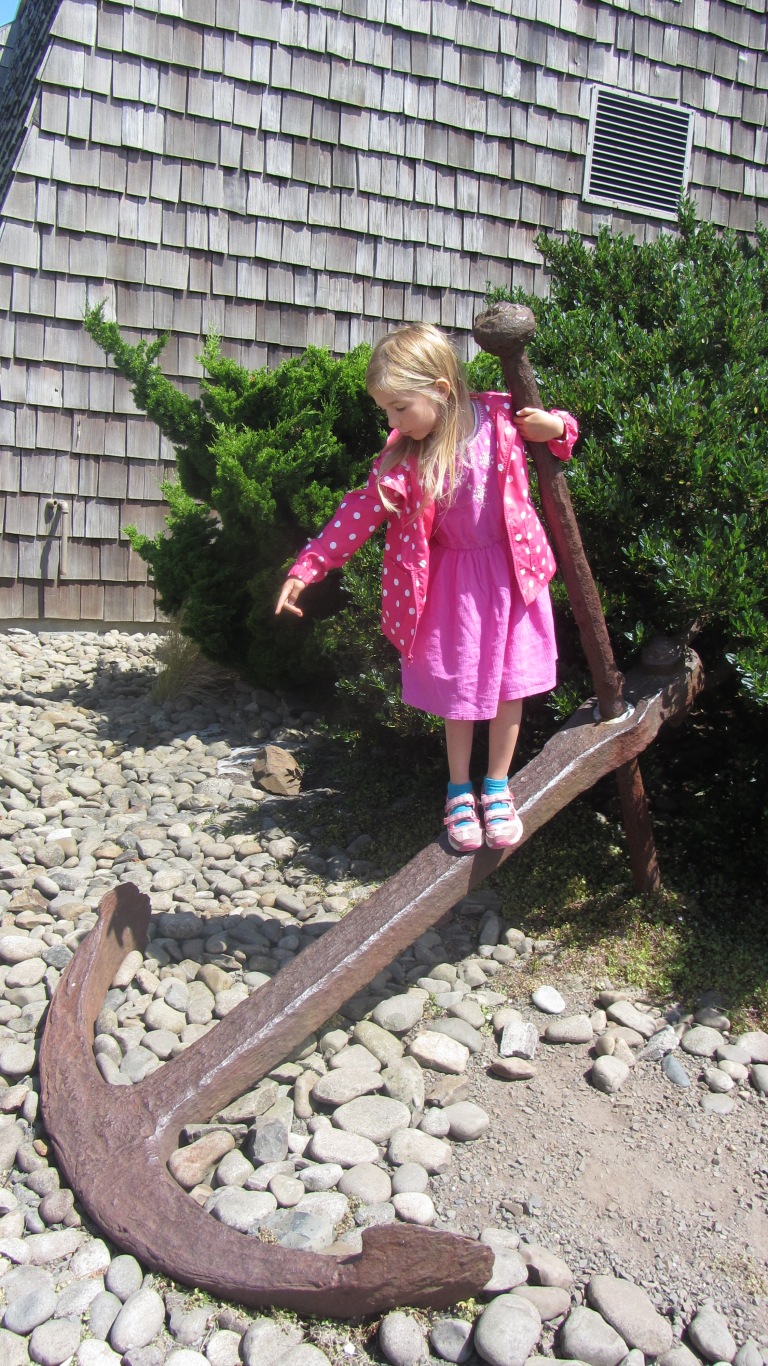 We spent more than the “recommended” 2 hour stay there, and still didn’t experience everything.

I can ramble on and on about the things we learned.  I cannot remember ever being at a more “foreign” museum.  I knew nothing of this area’s culture, livelihood, and heritage.  While I can’t say I really “felt it,” I can say that my heart is endeared to them and to their story.  Very well done.

After a tailgate lunch we boarded a vintage trolley, with local guides sharing their stories and history.  At $1 a person, it was quite a value!  Twelve thumbs up! 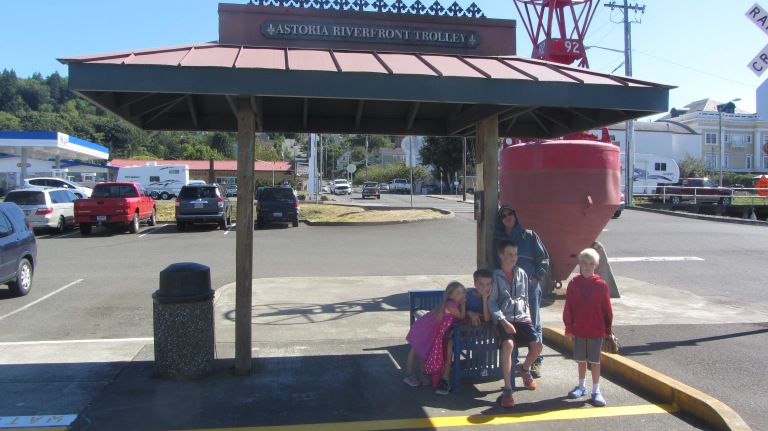 We also visited local military batteries in this area.  Battery Russell was the only known place in the continental US to receive enemy fire in WWII.  Pretty neat.

It was so much fun to drive out on the northwesternmost extremity of Oregon, for the picture on the GPS alone!

But we also got to see “the bar” (the place where the Columbia River meets the tides of the Pacific…one of the most dangerous places on earth for a ship’s captain.) 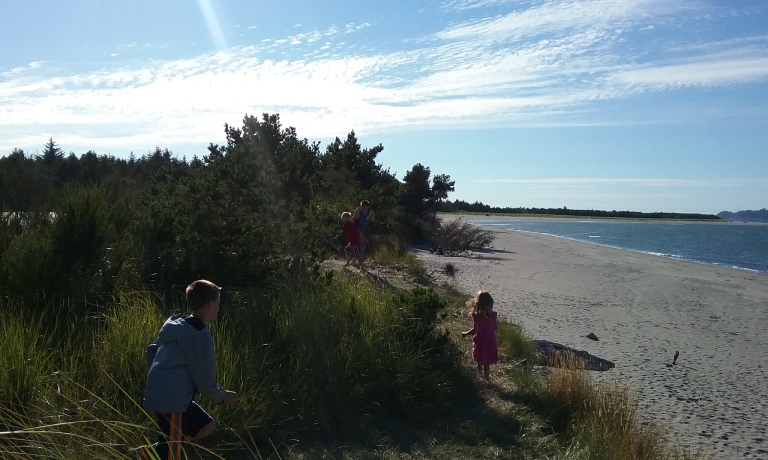 It reminded me of the Coast Guard Station at the Port of Garibaldi, OR, where Tennyson’s poem graced a plaque which memorialized those service members who gave their lives in the line of duty.

There was also a nature viewing area

as well as a Amy Corps of Engineers tower structure on the jetty that offered 360 degree viewing of the whole area, both the ocean and Columbia sides of the peninsula. 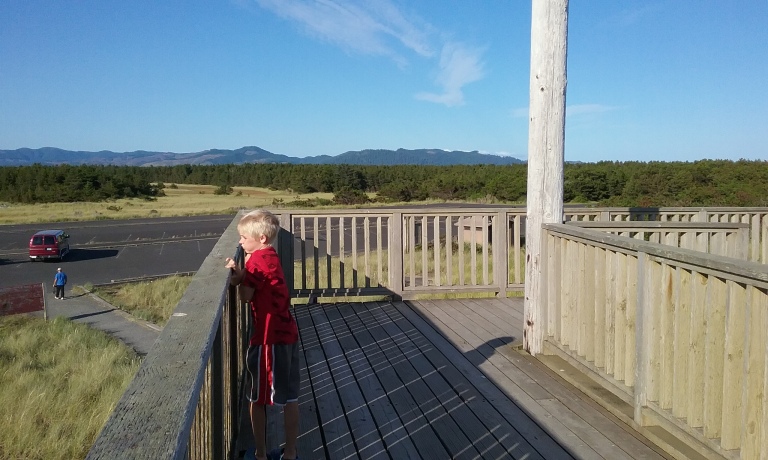 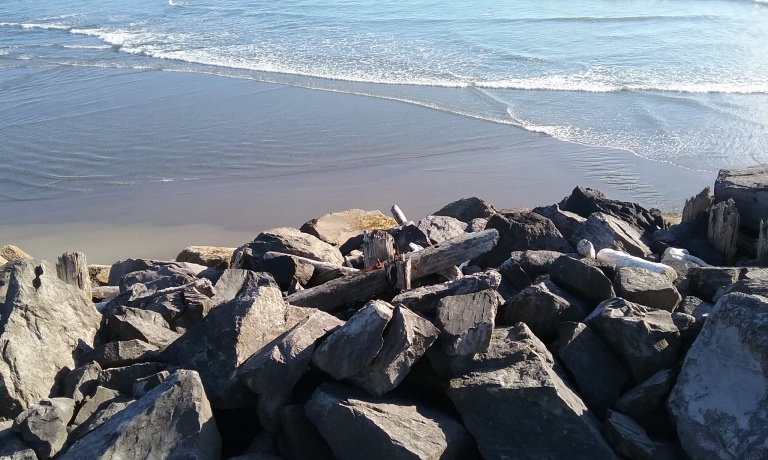 The next morning, Cliff & the boys fished in Coffenberry Lake.  That afternoon they fished the Columbia River, as well as the ocean jetty, where they were so intimidated by the waves that they didn’t stay long.  The fishing wasn’t as good as the Bighorns and the Tetons.  Nadia & I had “special girl time.”

We really enjoyed our visit to Fort Clatsop, too.  We did a 2-hour, ranger-led trail along the forest and Neutal River.  We not only learned to identify local plant life (especially berries!), but our group also heard the ranger discuss the way the river has changed through the years, through agriculture, industry, and conservation. 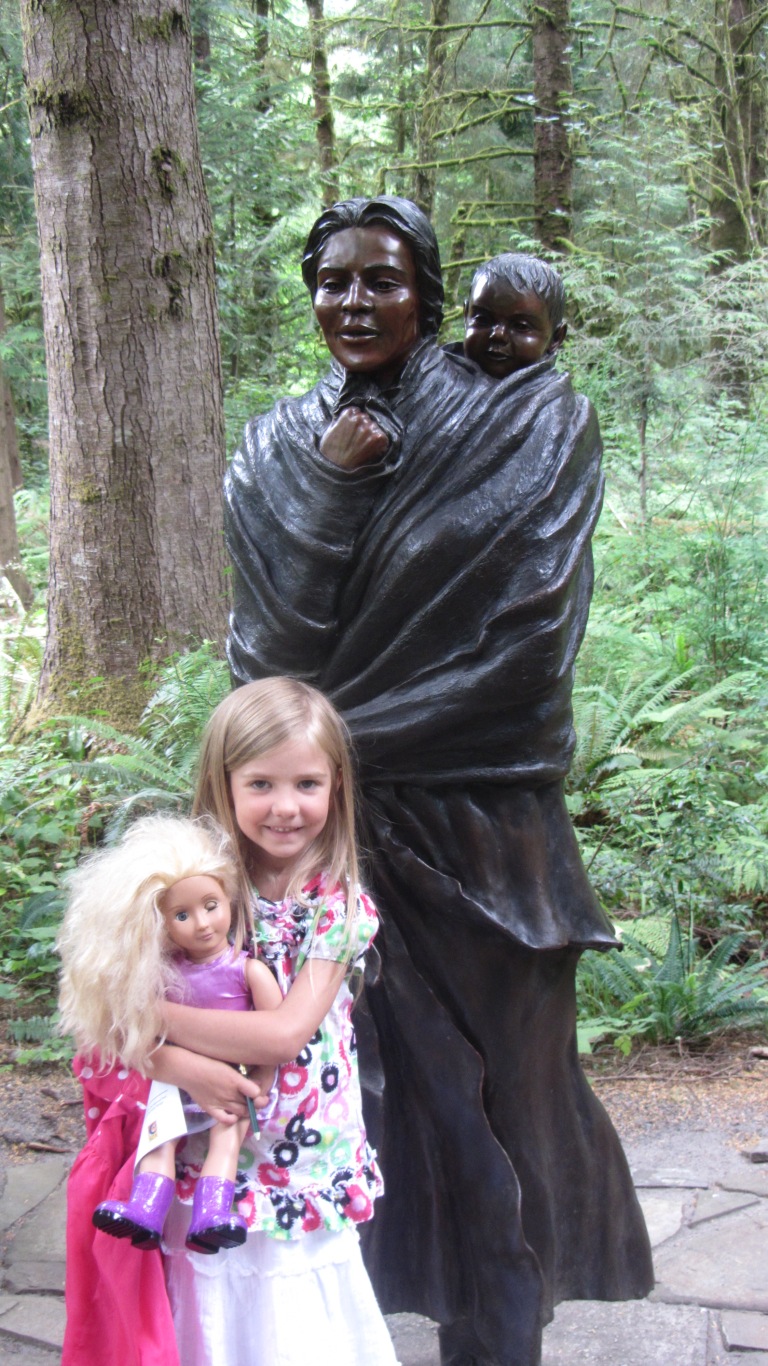 The kids earned their Junior Ranger badges there, which was a big deal! 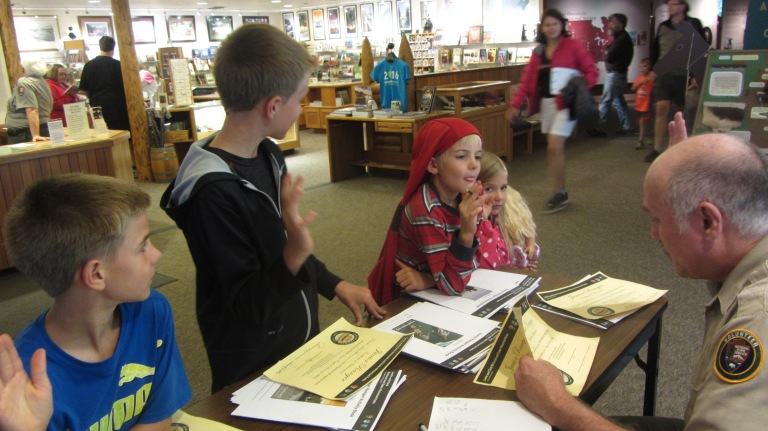 We had seen the Astoria Bridge when we were at the Maritime Museum, but we got to cross its 4.1 miles when we ventured onto Washington’s Long Beach,

where we visited one more military battery 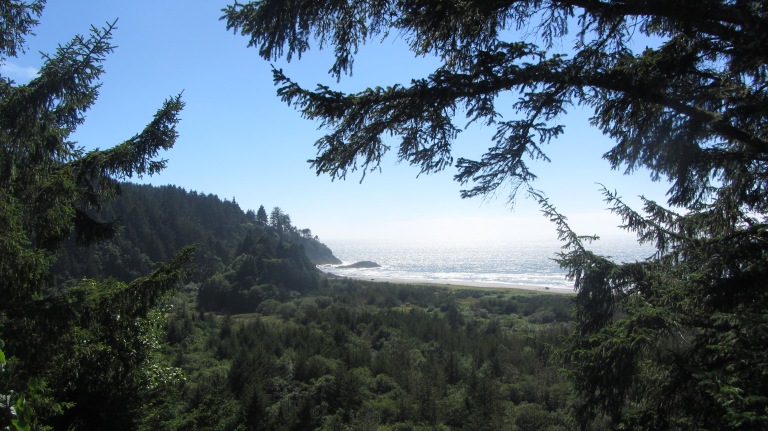 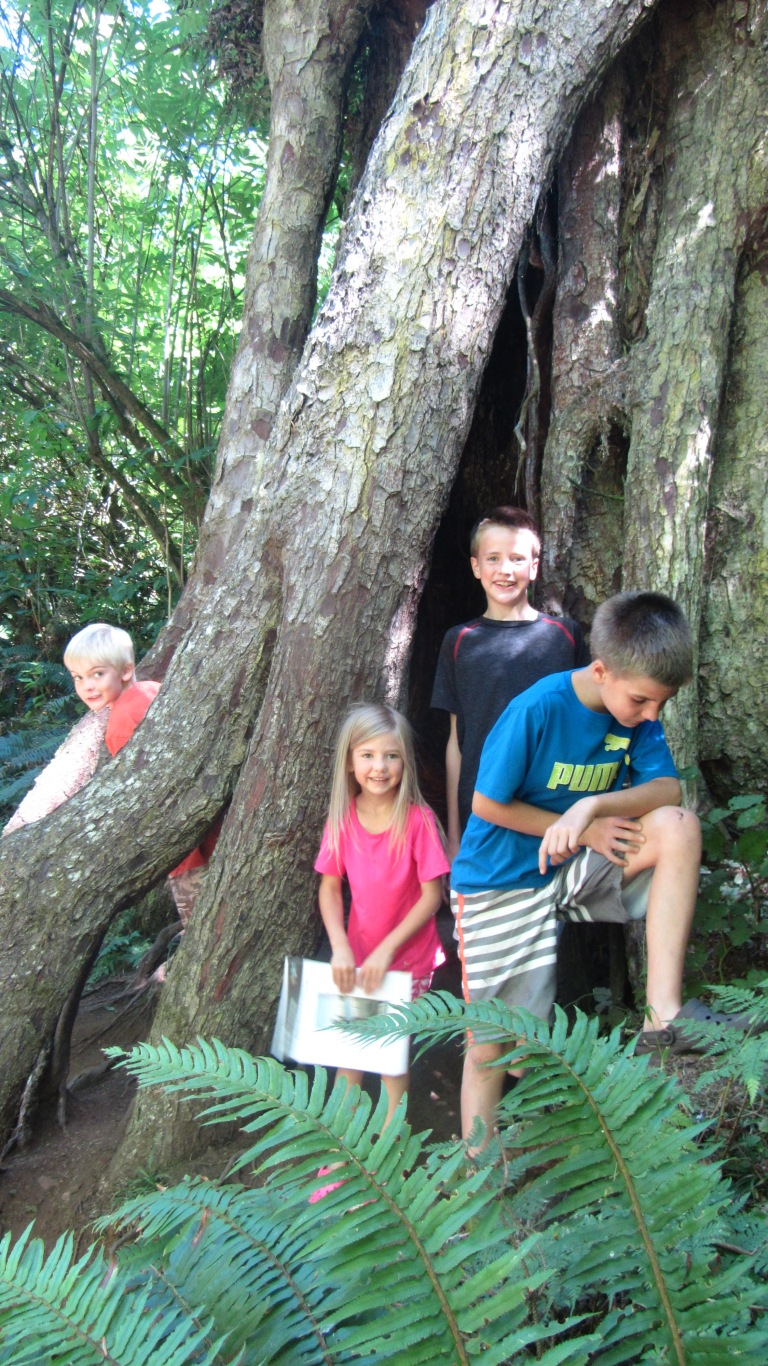 We thought that Cape Disappointment was a good name for the place, because we wanted to eat at this pizza joint, and it was closed!

Having had a similar experience on the Oregon side, we thought that it would be fun to drive to the tip of the peninsula, but someone had other plans. 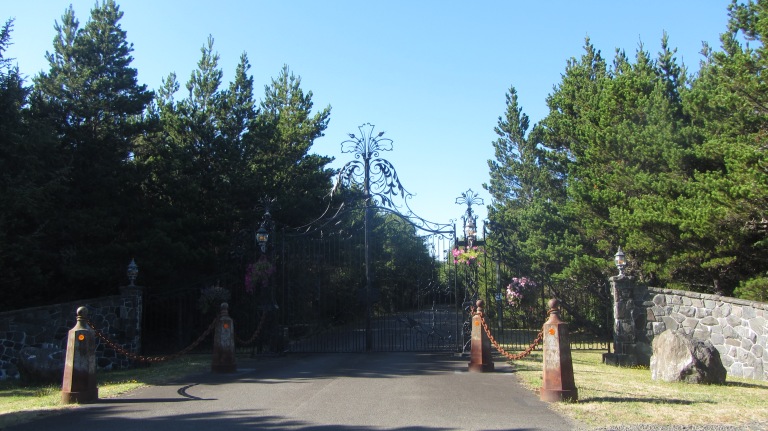 I guess that’s the end of that road!  We drove back down the bay side of the peninsula and then back to Oregon.  We were SO hungry and stopped at this hole-in-the-wall pizza place out of desperation.  This was THE BEST pizza we’ve ever had.  And it’s not just because we needed food badly.  The crust was perfectly crisp, and the toppings were bountiful, fresh, and incredibly flavorful.  If you ever get desperately hungry in Warrenton, OR…look up Fultano’s Pizza! 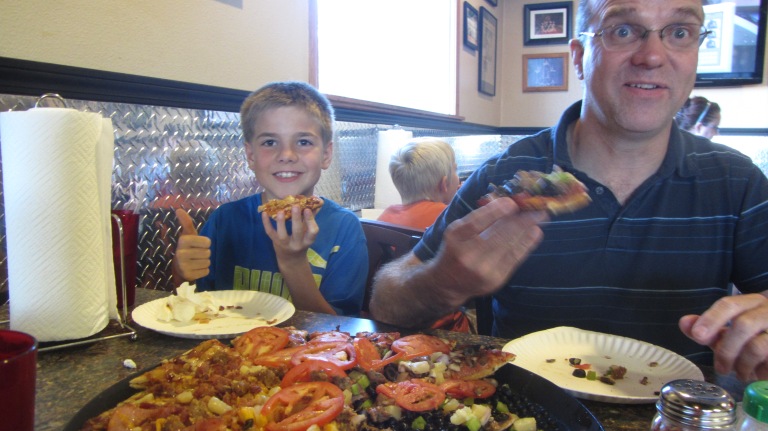 We noticed that our tire was low the morning we were supposed to leave town, so we stayed all night in this parking lot.  The guy fixed it for us for free!

We took off across northern Oregon at the end of our stay, stopping at a fish hatchery

and followed a trail along the Gnat River, picking lots of luscious berries along the way! 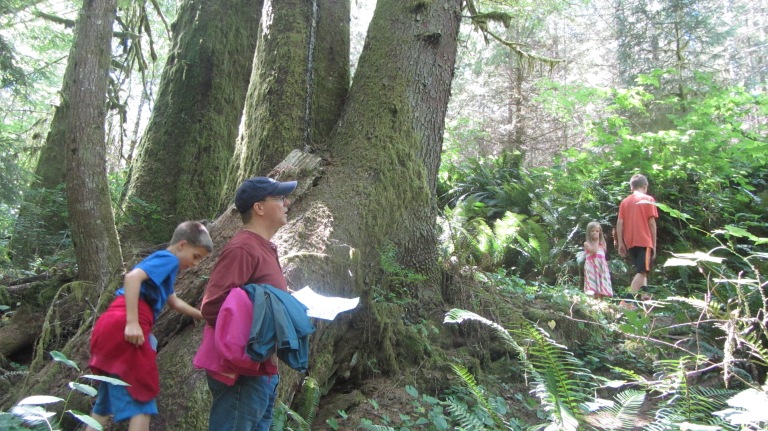 Cliff & the kids were SO wishing that we had the time to stop and fish!

Crossing the Lewis & Clark Bridge over the Columbia into Longview, Washington, we were so excited to be so close to Mount Saint Helens, our next destination.

I feel like I’ve just glossed over all that we did and saw this week.  I don’t know if that made for a dry post or not.  If so, I’m sorry.  It was definitely not a dry week.  This was a rejuvenating, restful time for our family after driving across the country for a month, with no more than 2 nights in one place.  Even before we unpacked and took off from Indy, we had been traveling for weeks, practicing life in Walmart parking lots.  Even with all that said, we were ready to move on…