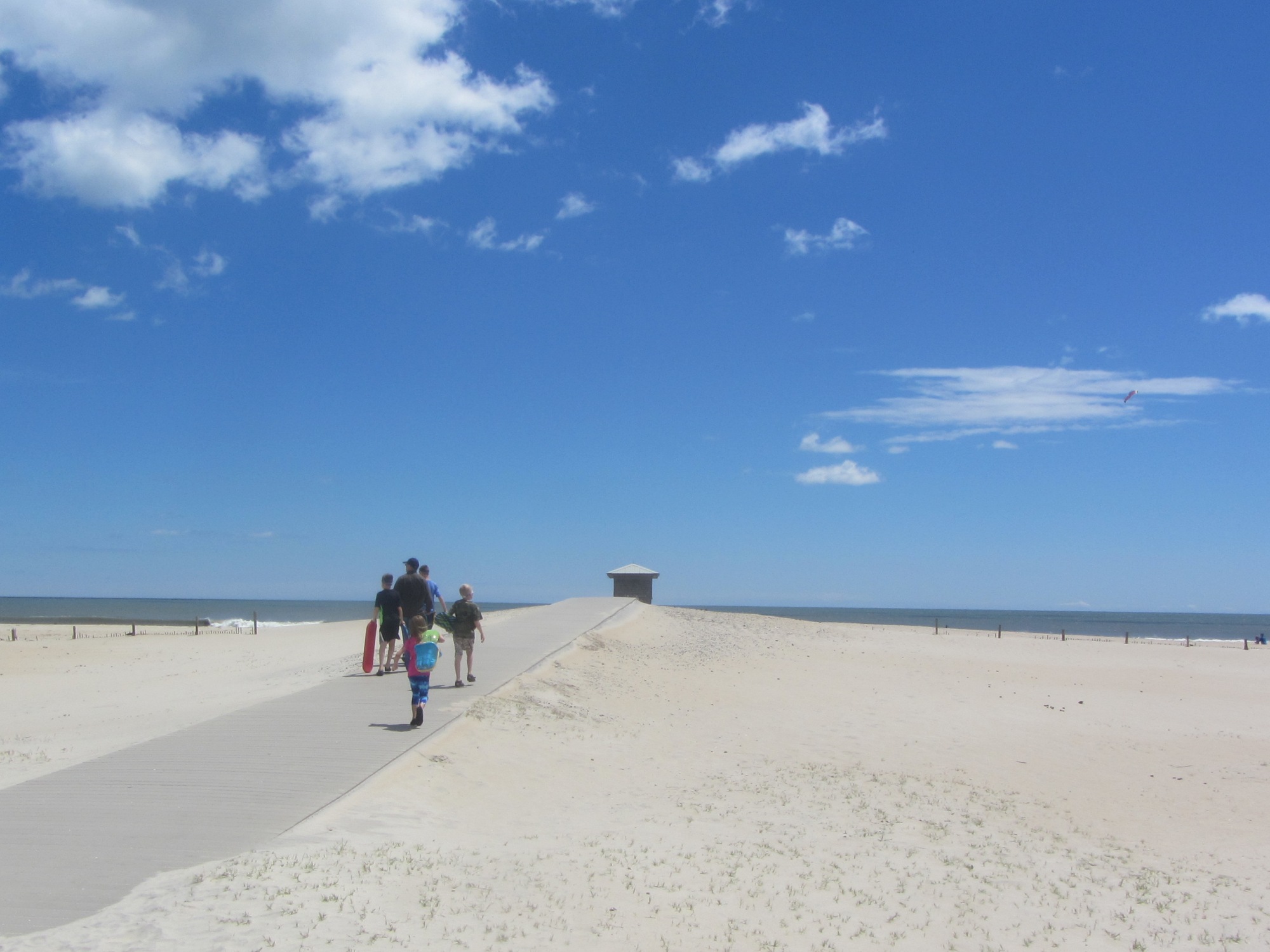 There’s something about visiting an island of wild horses that just pulls the same string in my heart as, say, observing a herd of bison in South Dakota or reading the Declaration of Independence.  Does it do that to you?

I’m not exactly sure when I learned of Assateague Island, or the inhabited Chincoteague Island nextdoor.

But, at any rate, when I was planning this trip, I knew we had to go.  Just prior to our departure from Indiana, the children and I read aloud Misty of Chincoteague to get into the groove!  Marguerite Henry has such a gift!

We visited the small but informative Visitor Center before crossing the bridge to the island, 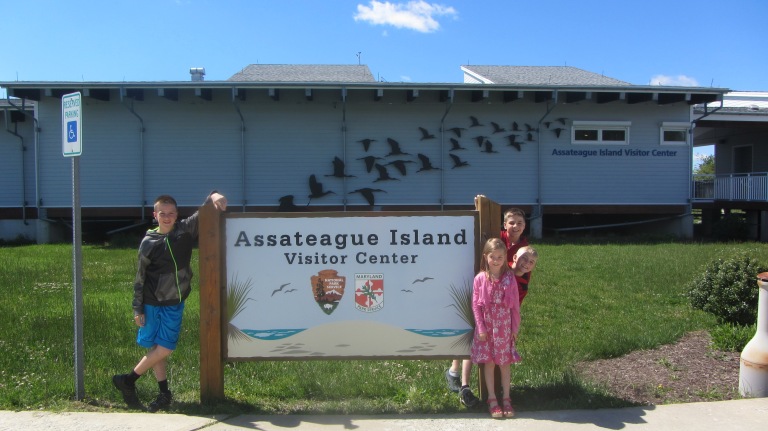 where we were greeted by the sightings of far-off horses by the shore!  (I didn’t get a really good picture of them.  Sorry!) 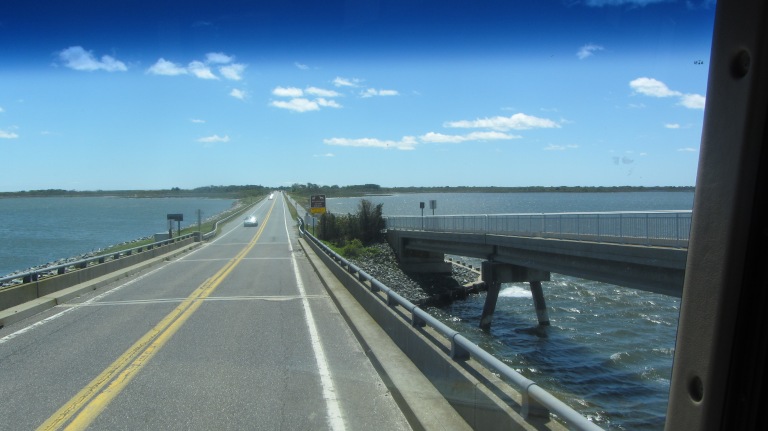 The weather was still as chilly and windy as on the Delaware Shore, but it was sunny today, so the kids decided to take advantage of it!  We told them to go for it!  Today is when we’re here.  We won’t be here when the weather is better.  Seize the day, children! 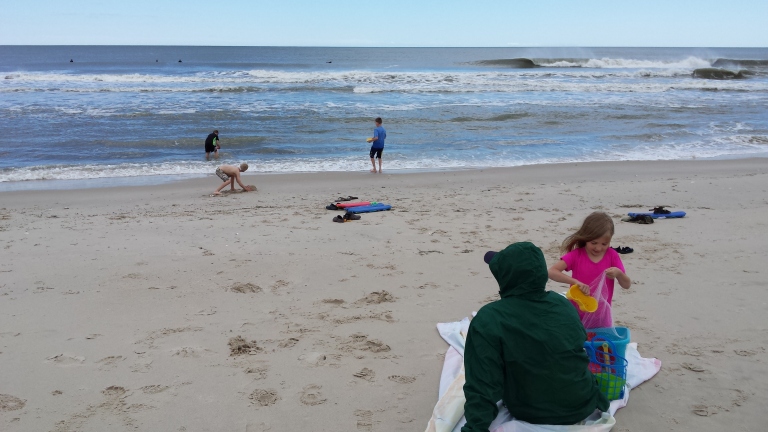 Pure cold fun!  (These pictures make it look like it’s paradise, but it was only about 60 degrees…with high winds.  I’m sure that the water temperature was in the 40s or 50s.  The surfers all had wetsuits on.) 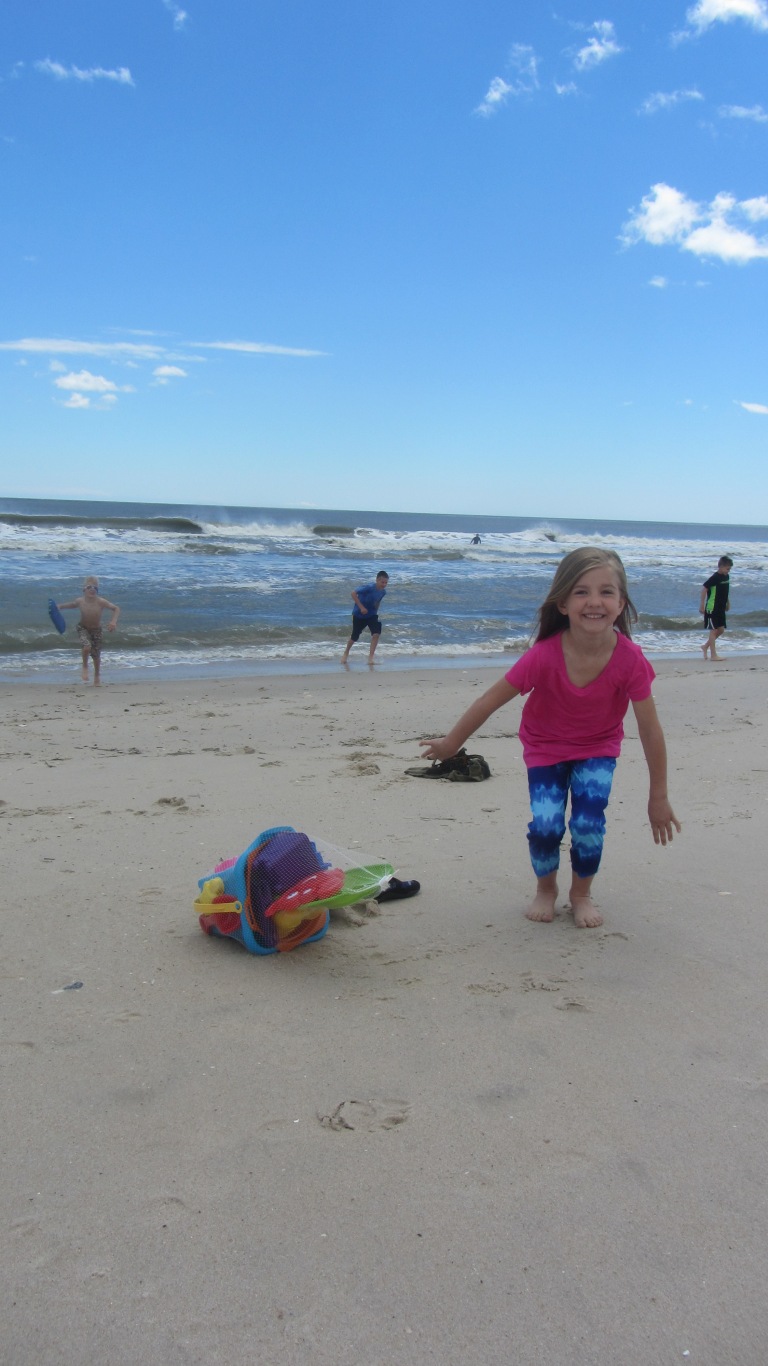 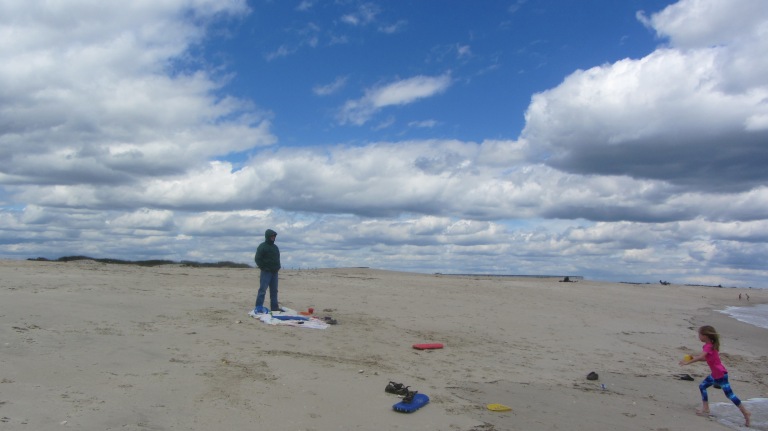 We met some new friends, the mole crabs.  They burrow into the sand.  Once we found out they wouldn’t bite us they were great fun! 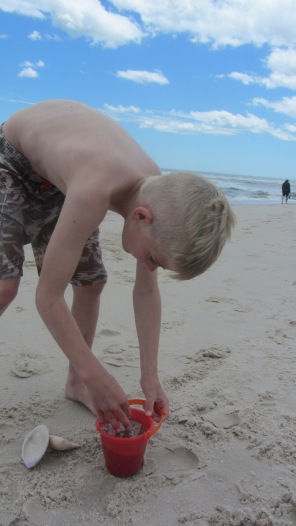 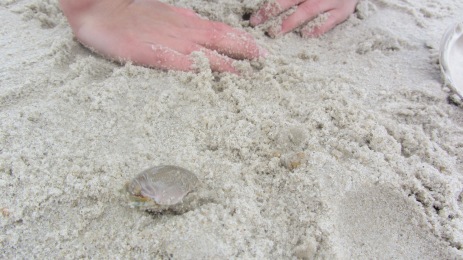 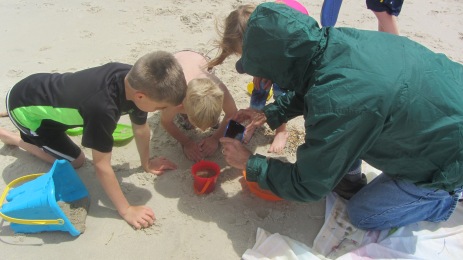 Obadiah and I conversed as we walked back to the RV, between chattering teeth and shivering bodies.  We think that some our adventures come with a certain amount of discomfort involved.  This one reminded us of our dip into the Great Salt Lake, despite the fact that we were on the opposite end of the temperature spectrum. 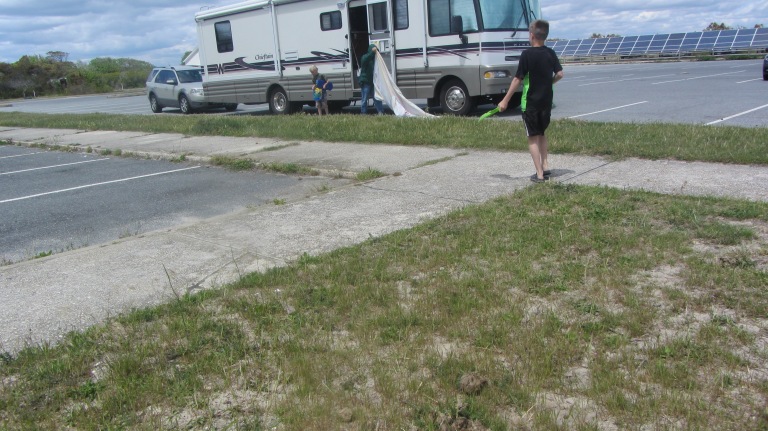 Isaiah had a mind to do a science-experiment-meets-art-project-meets-momento while the rest of the kids changed out of their wet clothes and ate granola bars. 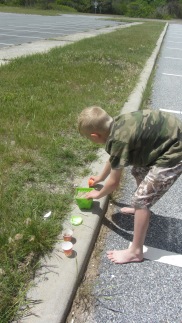 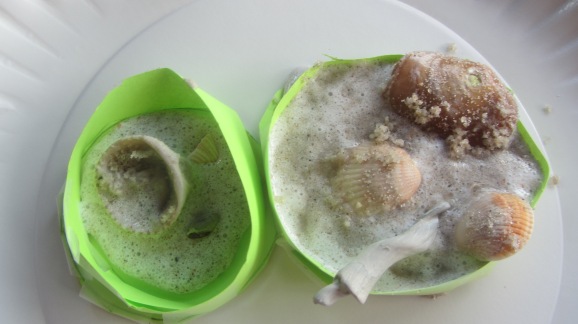 Driving out of the park, we encountered some more of these amazing creatures.  Here they are treated like any other wild animals in a national park…free to live and to die like wild animals, with some intervention for population control because the island is so small. 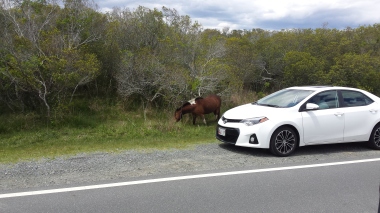 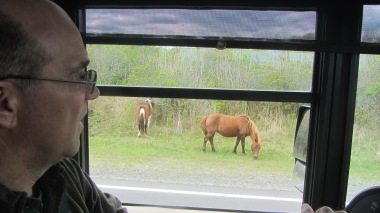 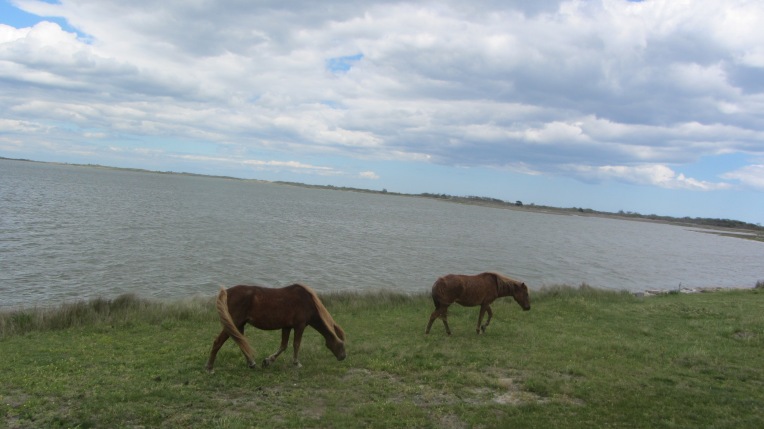 I think we were all glad we made the stop.  We had a 4-hour drive to our next destination, First Landing State Park Campground in Virginia Beach.  In that time, we would encounter three states: Delaware, Maryland, and Virginia! 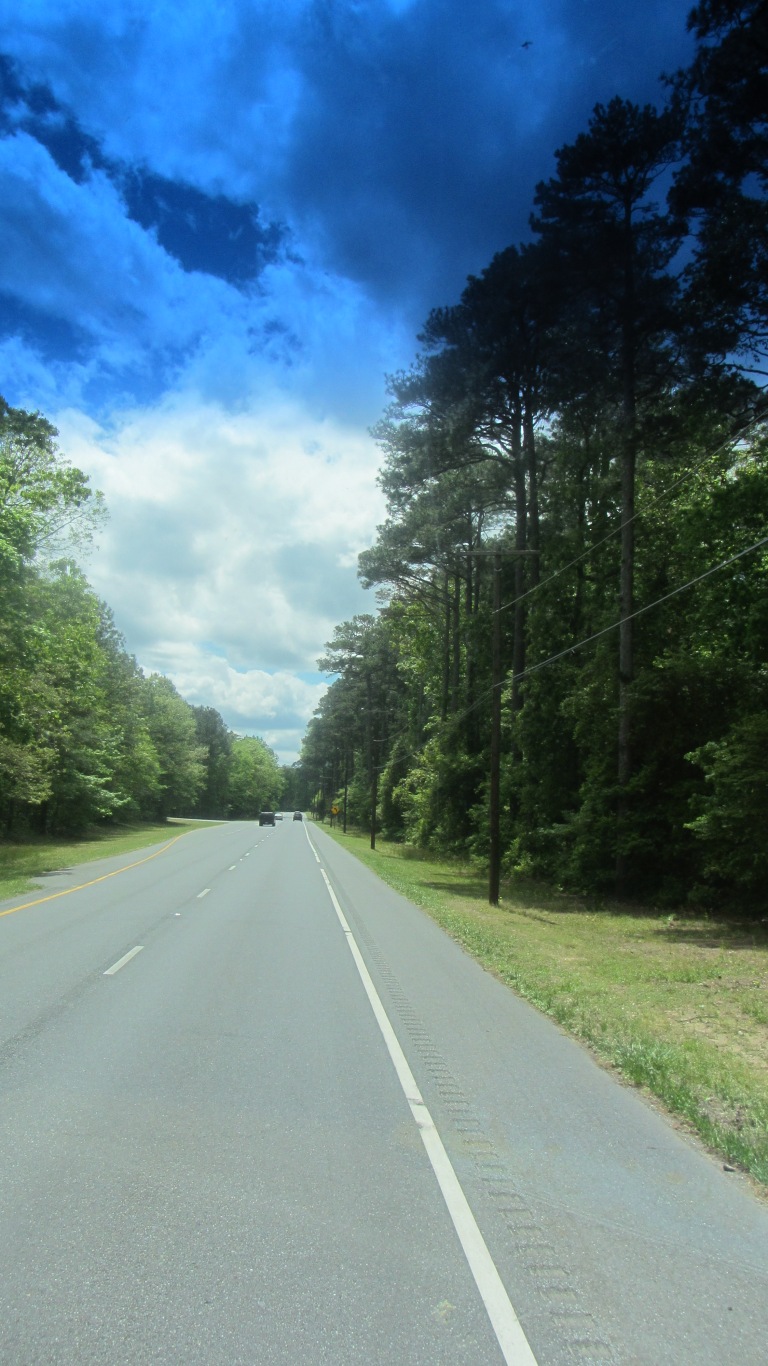 On a 4-hour drive, you have a bit of time to think.  So, having recently visited Gettysburg, I got to thinking about how this place, with an interesting geography, was affected by the Civil War.

Thanks to Google, I quickly found out that this area was early in the war brought under Union control and remained so for the rest of the war.  Thus, there were no battles.  Thus, there are no battlefields or monuments or forts to visit.  It pretty much lived life as usual, under the watchful eyes of the North.

If you come back next time, I can tell you about our cro$$ing of the Chesapeake Bay Bridge-Tunnel!