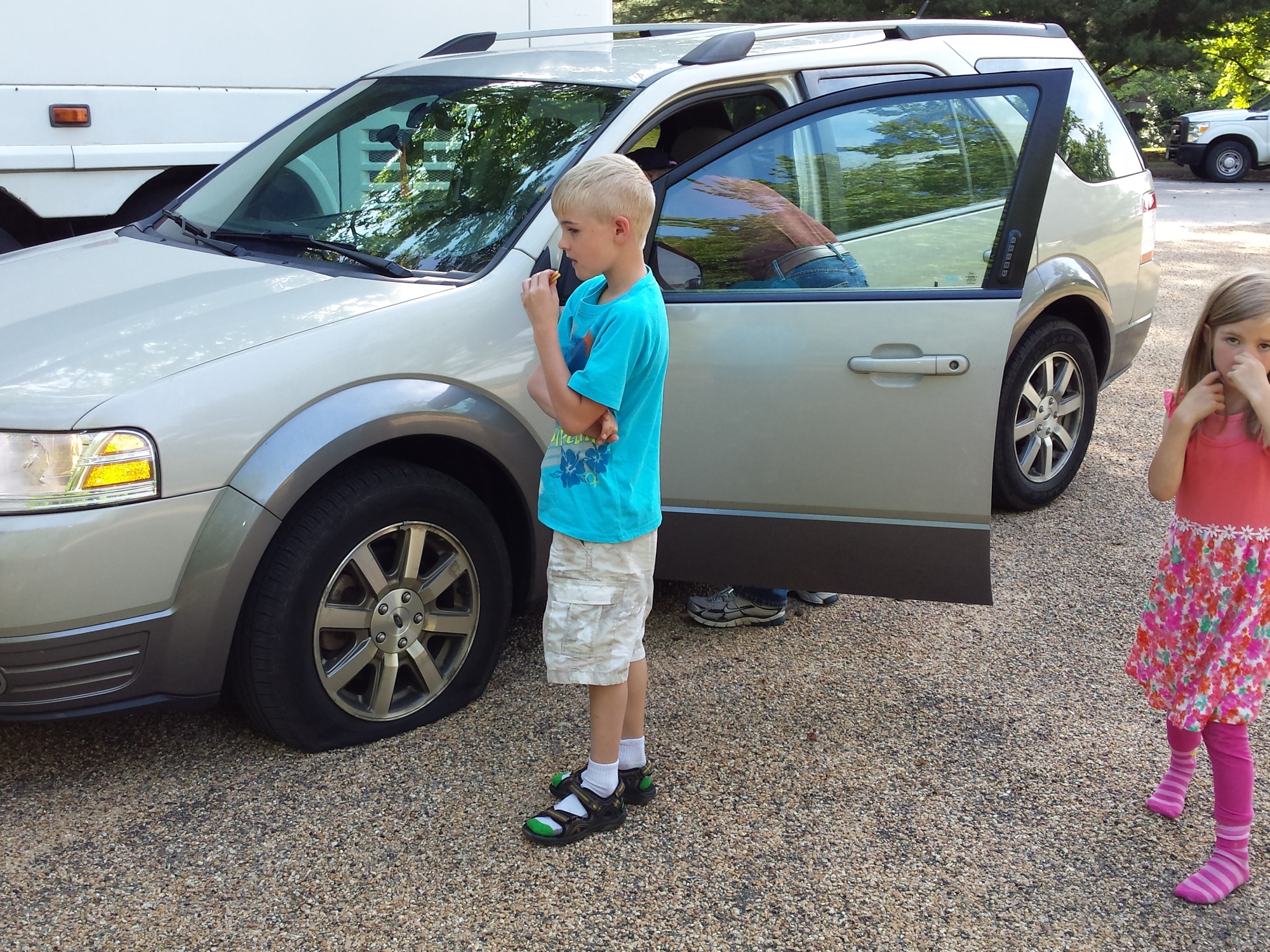 So we left Virginia Beach an hour and a half late.  Not too bad when you’re on “island time!” 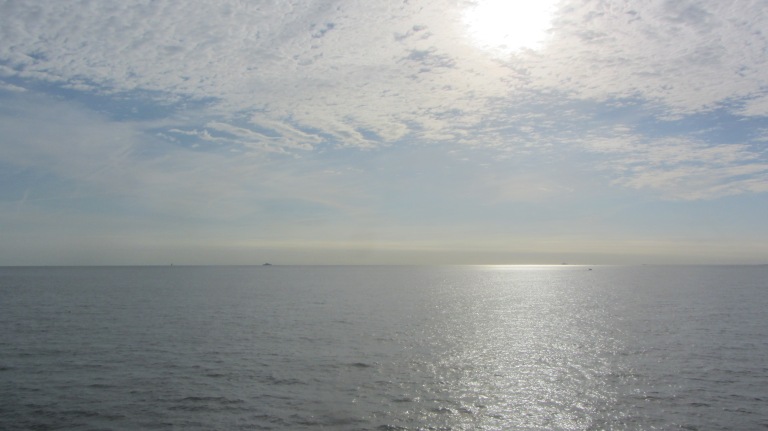 By this time the mountains are calling us, and we’re asking ourselves…should we just skip Yorktown?  We decided that since it was the definitive battle in the Revolutionary War, we owed it to the kids to at least do a quick visit since we were right under its nose.  It was on our way…just about an hour from Virginia Beach.

All our plans changed when Obadiah, who on arrival was assigned a job in one of the bays outside, entered the RV calmly uttering these words:  “Papa, I’m not sure, but I think you should check out the car.  I hear a hissing sound and smoke is coming out of the tires.”  (He’s also the one who told me with delight, “Papa’s doing gymnastics!” when Cliff fell out of the tree.)

It turns out that our Even Brake, a device used to apply our TOAD’s brake pedal when the RV also brakes, malfunctioned royally. 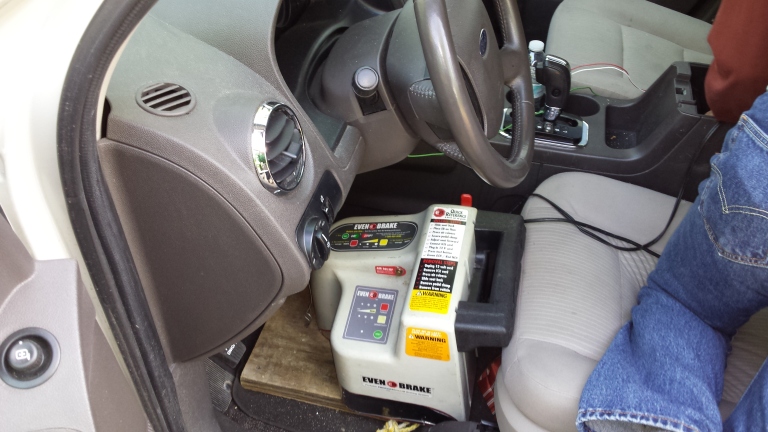 It apparently had been applying the brakes continuously for quite some time, while we essentially dragged the car down the interstate!  The power supply was melted into the cigarette lighter!  It took Cliff quite some time and a lot of force to get it outta there! 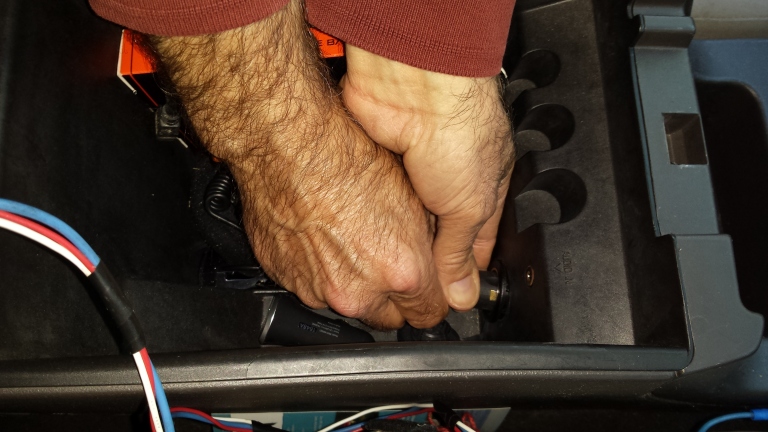 Cliff measured the temperature of the tires about 10 minutes after we had pulled in.  600+ degrees and totally flat! 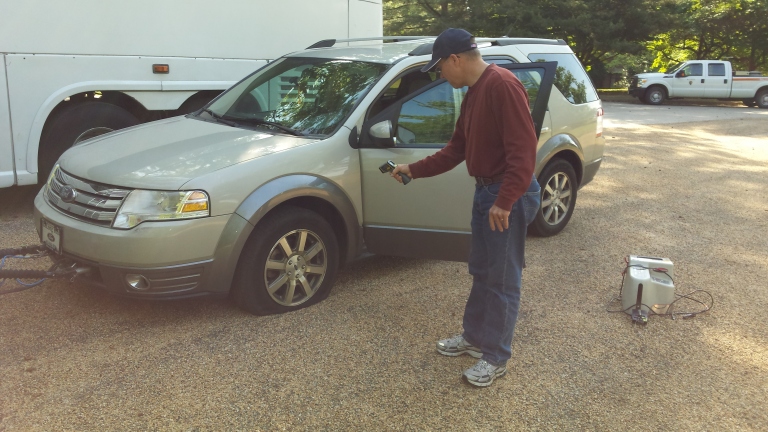 We had planned to do a family Bible study anyway, so we went ahead with the plan while the tires cooled down enough for Cliff to change into the spare.  (After he dug it out from under all the laundry detergent, bottled water, innertubes, beach toys, and seaside “treasures,” of course.)

While Cliff changed the spare and researched/stopped into repair shops, the kids and I headed into the Visitor Center, not knowing just how long we would get to stay. 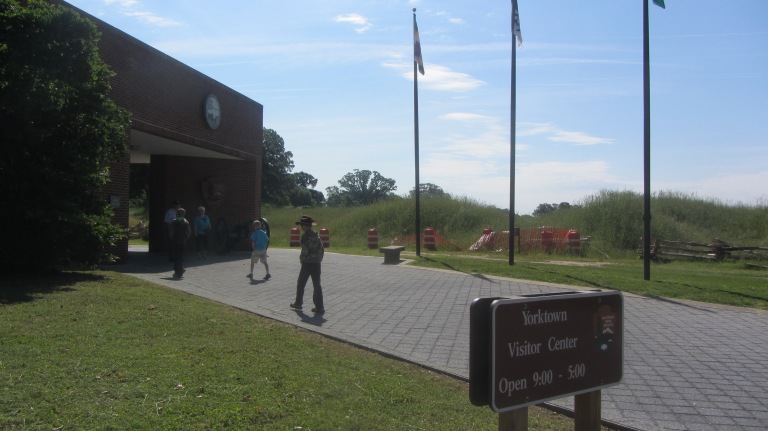 I thoroughly enjoyed the multimedia map display of the battle, and the children remarked that they understood Yorktown much more after watching a 14-minute video.  We waited for the 1:15pm Ranger-led walk by returning to the RV for some PBJs and cinnamon applesauce and then investigating the cannon on display. 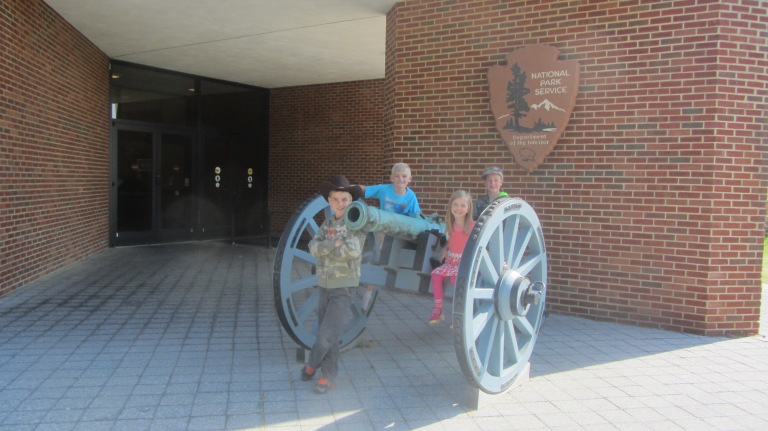 Cliff returned from Meineke just in time to join us on the Ranger Walk, which turned out to be amazing.

He was able to get the tire repaired, but the manager was not able to obtain the parts in time to do the rest of the repairs today.  In the middle of the Ranger Walk, however, the manager called & informed Cliff that the parts came in earlier than expected!  (He had family members who worked at the auto parts store!)  I had to record the rest of the talk for him while he and Nadia headed back to Meineke.  The talk was THAT good.

As the Ranger spoke and we stood on the actual British stronghold, I got a good overview of what happened here.  I started piecing together what actually won/lost this battle.  Initially I saw the British arrogance costing them dearly.  The very thing they thought was impossible (a strong Patriot sea presence) and therefore guarded themselves not against, snatched their chances of ever winning.  Another fumble was that in the ruthless late-autumn heat they chose comfort over prudence, leaving some fortifications unbuilt.  A third, and probably chief, error is that Rear Admiral Graves chose to do things “by the book,” missing several opportunities to defeat the French Navy as they presented themselves.  It made me think about what self-defeating behaviors cause us humans to fail sometimes.

On the contrary, George Washington seemed to take action, marching his army 680 miles despite uncertainties that key elements of the plan would even come to fruition once they got there.  It is inspiring to think of his hope and where it got us, isn’t it?

The kids had plenty of time to work on their Junior Ranger badges.  I have a love/ dislike relationship with the Junior Ranger program.  On one hand the badges inscribed with the name of the park bring such a feeling of belonging and accomplishment for the kids.  They are good mementos for them to keep.  On the other hand some most of the activities detract from the park rather than inform.  The kids are so consumed with the word searches and fill-in-the-blanks that they totally miss the artifacts, stories, etc. that are right in front of them for only a limited time.  If I could redesign the Junior Ranger program, I would instead have the kids interacting with the park.  Finding a certain museum placard to investigate a particularly interesting display, walking to a section of the park while reading about what happened right there and then imagining what it would be like or how it would feel to take place in that event, drawing a map of key places, writing a “letter home” to family members as if they were a participant in the historical event.  But, they didn’t ask me!

The boys and I then discovered a free trolley into town, 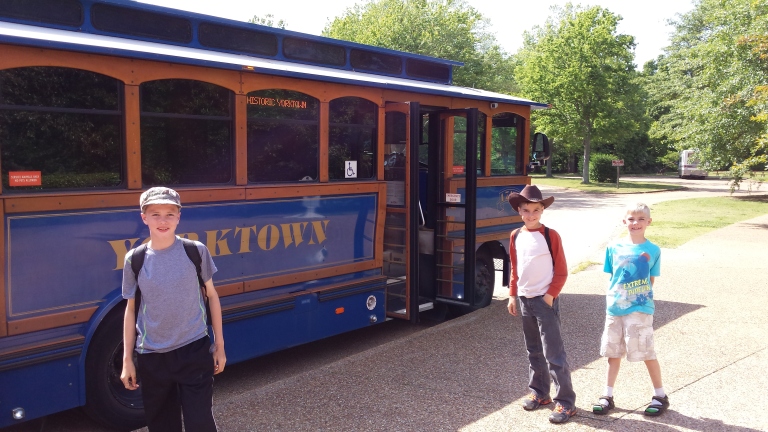 driving past the Memorial to the French soldiers who gave the last full measure here. 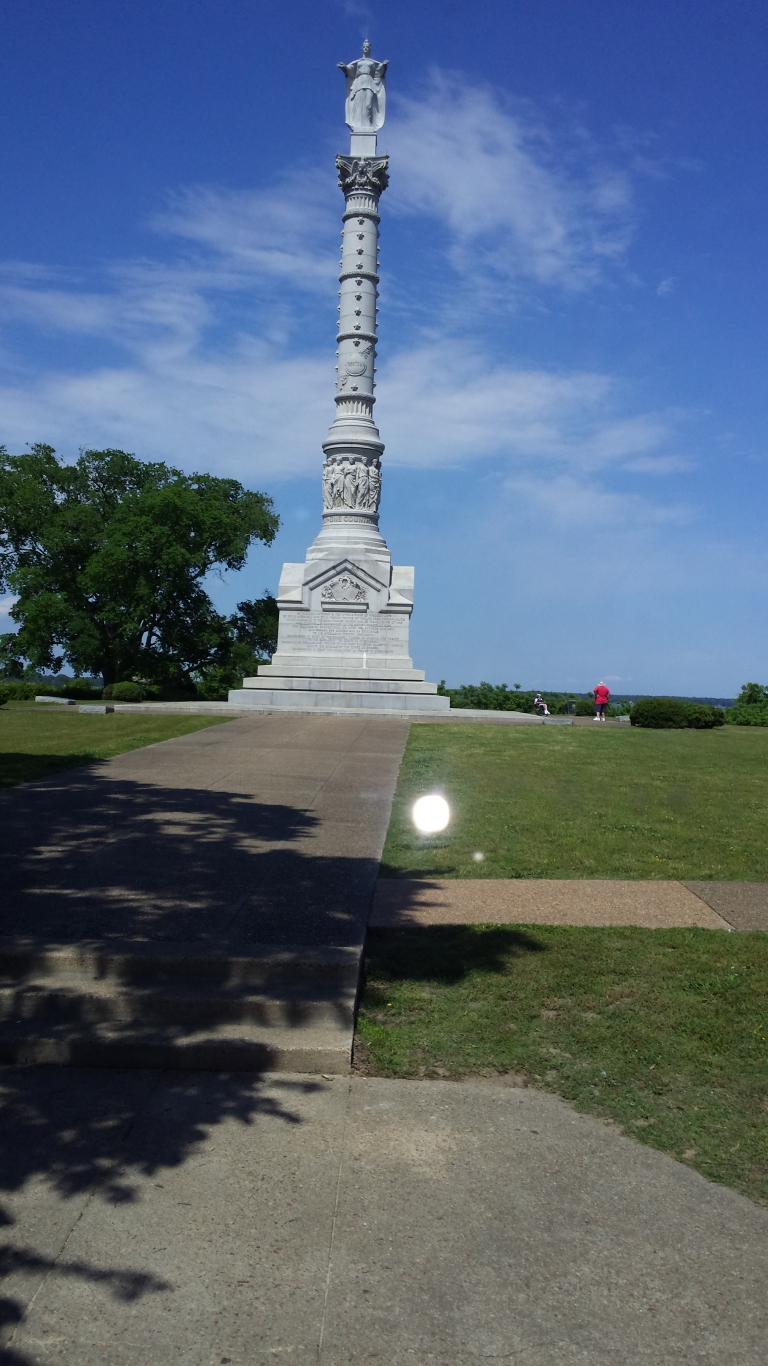 We just happened to stop in front of Ben & Jerry’s Ice Cream. 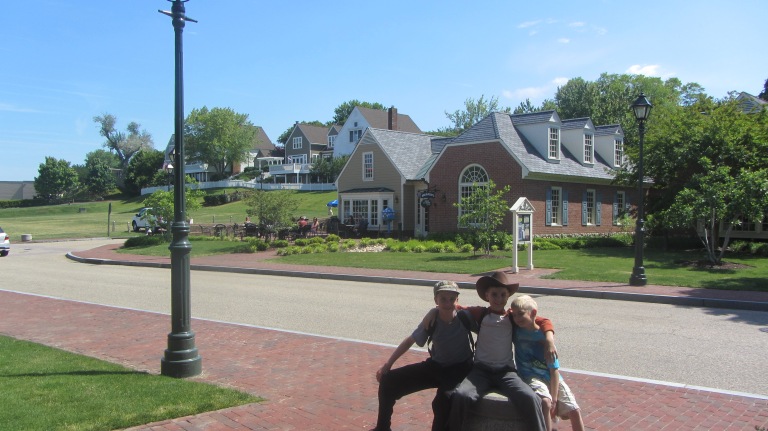 Not quite Tillamook, but it was a great way to sit and watch the boats on the York River.  Then we took the trolley back to the motorhome, where I proceeded to take a long-awaited nap while the boys simulated the naval blockade with Legos, twigs, and gravel.  That’s hands-on history I’d add to the Junior Ranger program, too!

Cliff called with bad news.  The repairs were over $1300 to replace the brake pads, calipers, discs, wheel bearings, and all the brake fluid, which had been boiled under the intense heat.  The plastic hubcap centerpiece, originally a circle, was now melted into a smaller pentagon. 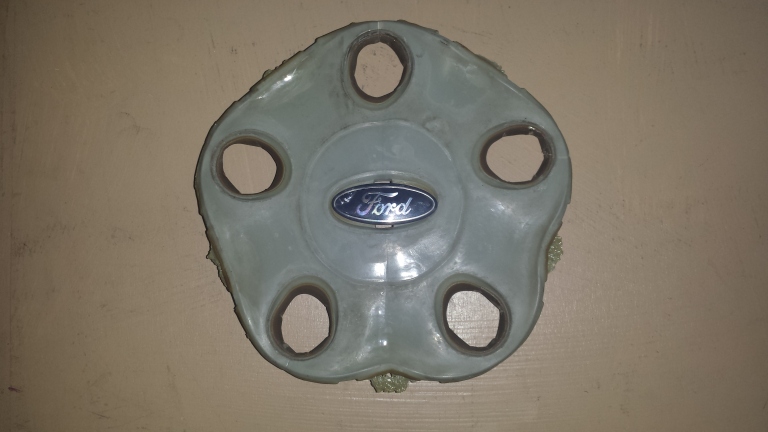 Kind of like an automotive version of Shrinky-Dinks!    The caliper seals were burnt to a crisp.  But the good news was that our car was fixed & ready to roll outta there.  We were so thankful that we had chosen to stop at Yorktown that morning.  We didn’t want to think of what could have happened to the car, had we kept on driving to Monticello instead!

We pulled out of Yorktown near sunset, satisfied with our day’s learning.  But it would be almost 11pm before we could stop for the night at the Charlottesville Lowes (Walmart was full), right as massive amounts of rain started to fall.  Tomorrow we would do Monticello.