Because of the brake fire delay, we were feeling rushed and off-balance.  Rather than try to squeeze all of our mountaineering into one day, we decided to add a night at our next campspot and skip Shenandoah and the Blue Ridge Parkway.  It was hard to watch the signs pass us as we drove by the exits, but deep down we knew we were doing the right thing.

Especially because of the rain. 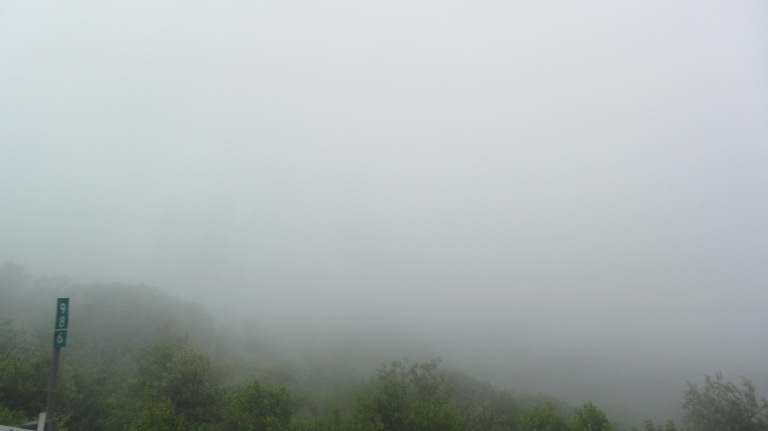 We did receive intermittent spurts of sunshine, and we enjoyed the rolling hills dotted with cattle and barns, heavily-wooded mountains providing a green background. 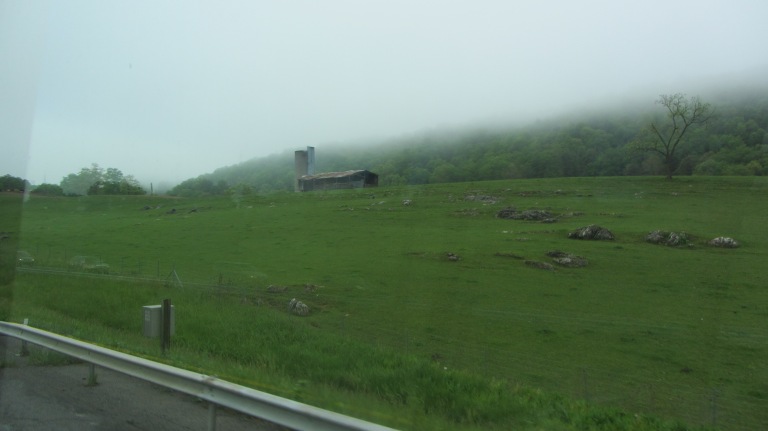 I had just written my “unity” post, so I had it on my brain.  I thought about the forest from a distance.  You look at it and call it one name: “forest.”  But it doesn’t take an expert to detect the variations in height, shades of color, shapes, and texture.  Yes, we know that in the seemingly still view, there are fierce battles raging for access to life, namely sunlight and water, but still: “forest”.  The redbuds tend to show off in the spring, while the maples command our attention in the fall (that’s what they were created to do, after all), and yet: “forest”.  Creation waiting and groaning.

Shortly after entering Tennessee we stopped at the Tennessee Visitor’s Center, where Cliff found an Opa-looking man, who graciously posed for a shot with him!  Unfortunately, you can’t see the curly gray ponytail in this picture! 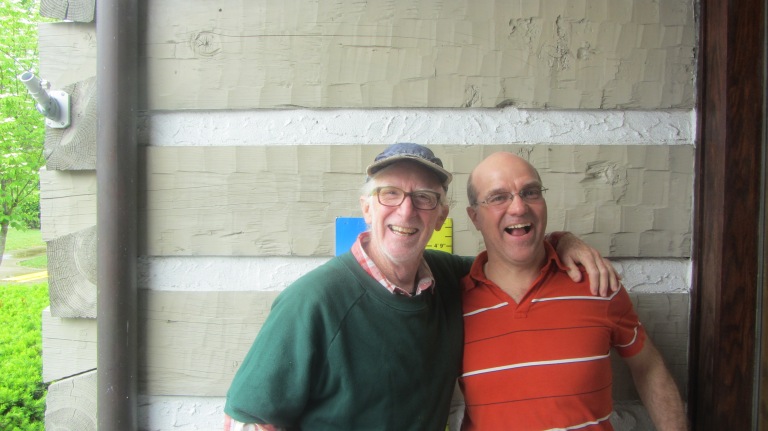 It was threatening rain as we pulled into Warrior’s Path State Park near Bristol, TN.  Sheets broke loose upon us as we arrived at our spot and began the process of setting up.  But it didn’t last long.  Here are some pictures shortly after we finished.

It felt “right.”  It was a pretty private spot, just a stroll to the boat slips and riverside trailheads, which were to be our family’s stomping grounds during our 3-night visit.

Warrior’s Path State Park was named so because it is located near the Native American trading and war paths.

Cliff & the kids wasted no time in unloading their fishing gear.  Early mornings, late nights, rainshowers…nothing prevented their fun!  One day they even drove to many local-favored fishing spots to try their luck.  Although they all caught something, it was unfortunately not the haul they longed for.  (They were spoiled by Wyoming.)  Even that didn’t stop the fun, though! 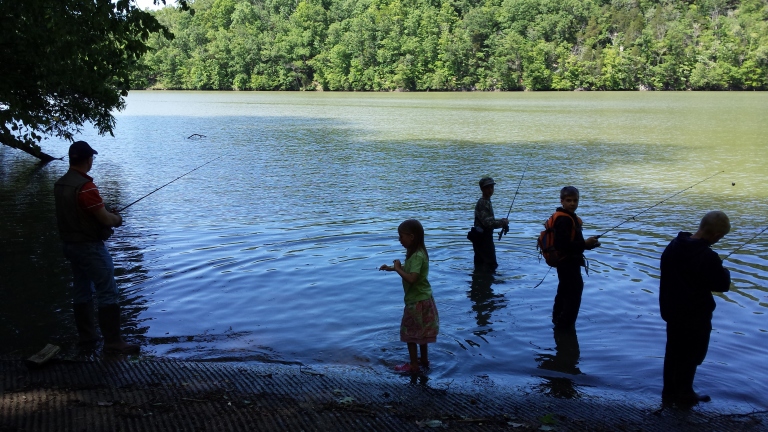 While here, I tried to cook with Old Bay for my first time!  On hamburgers and hot dogs!  Yum! 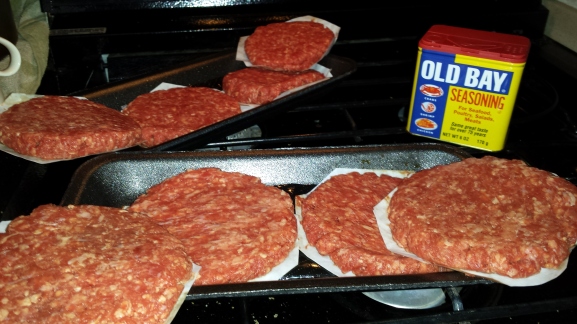 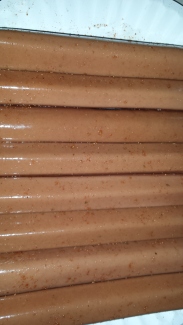 We had been desiring a family hike for some time.  Cliff researched some local areas and found a gem: Bays Mountain Park, with 31 trails of varying terrain to choose from!  We selected “Lakeside Trail,” a length of 2.3 miles.  We all wore backpacks so the boys could train for the longer hikes they will take with Cliff this summer. 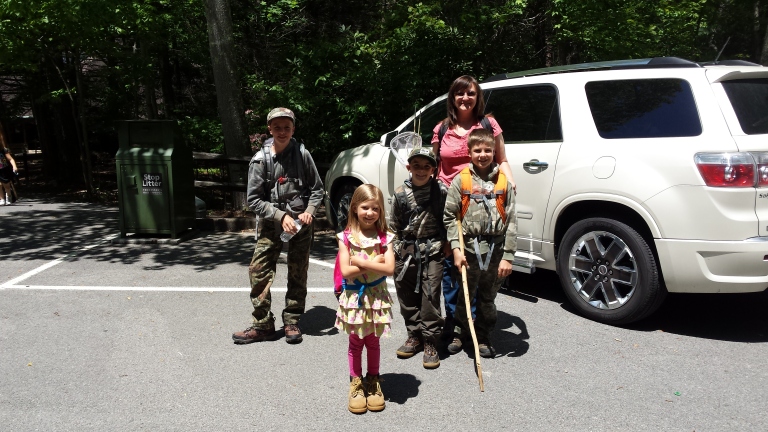 As we approached the lake, we discovered that Bays Mountain Park also houses different wildlife viewing habitats, where they keep previously-injured and rehabilitated animals deemed unable to return to the wild.  We tarried for a while, enjoyed close proximity to unspooked white-tailed deer, chilled by the howls of several wolves, awed by the raptors’ stature.

After the herpetarium, we started out on Lakeside Trail.  I was so thankful that there was no rain today, only bright sunshine trickling through the canopy above us. 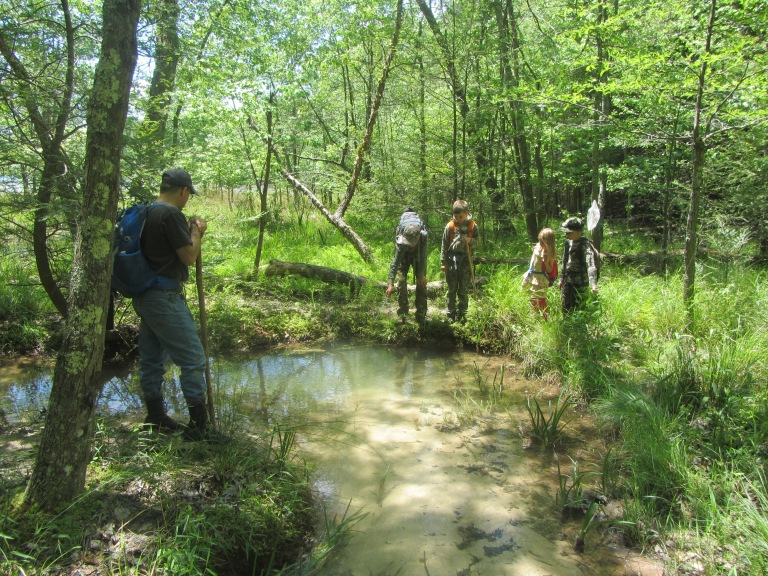 Caterpillars, butterflies, Mrs. Mallard nesting on a stumpy island, Great Blue Heron stalking up a hill with a large fish in mouth. 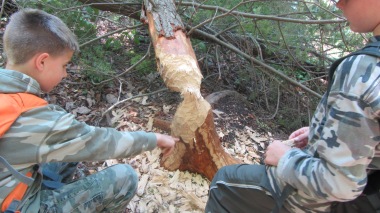 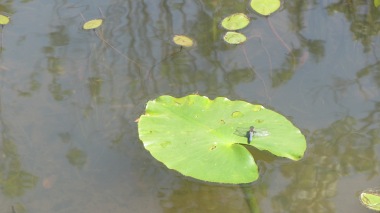 The 2.3 miles took us MUCH longer than you’d expect!  We stopped by the Nature Center, more for the “facilities” than for the learning, and headed up the hill to the parking lot, a little more sluggishly than we had departed!  Thankfully, Mama had brought a tailgate snack!  We didn’t return to Warrior’s Path until after 6!  But Cliff & Nadia still went out for a little Daddy/Daughter time on the river, where she “bee”friended a large bee. 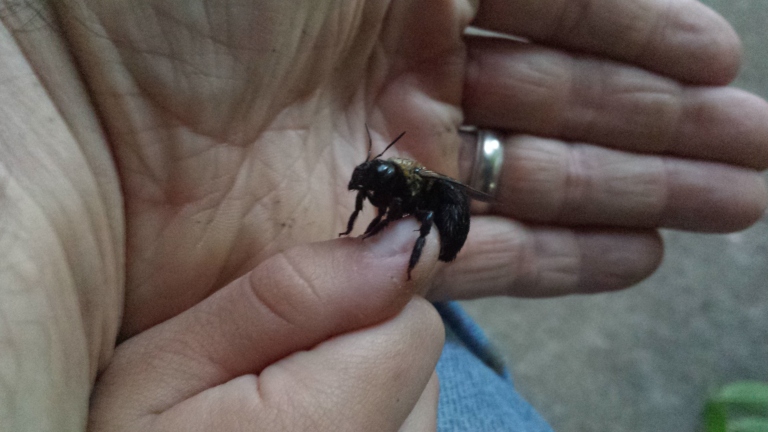 I made a friend, too!  The tiniest inchworm I have ever seen!  (It reminded me of the book Inchworm and a Half by Elinor J. Pincez!)

Our final morning occurred at the park’s stables, where a long-awaited event took place – a family horseback ride!  We were supposed to do it last summer in Yellowstone, but we had to hurry through the park because the campgrounds were full.  While our trail guide outfitted our horses, the boys picked out their favorite mounts.  Tacoma for Uriah. 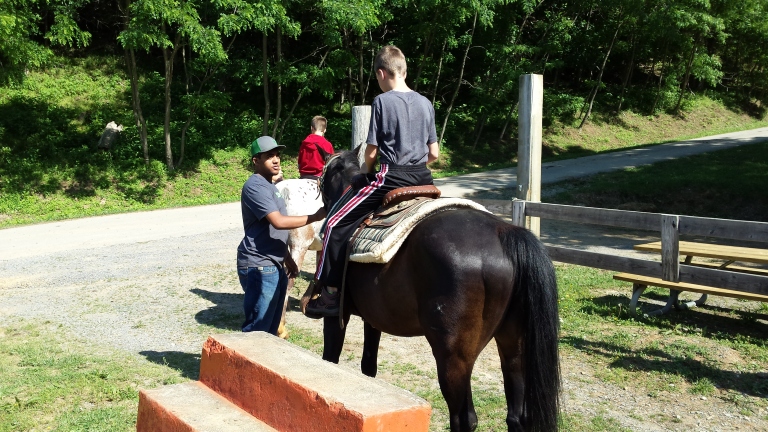 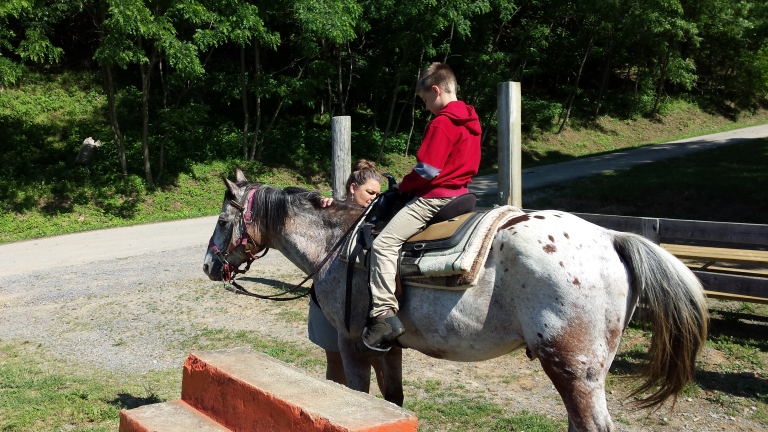 Which left me on Big’n. 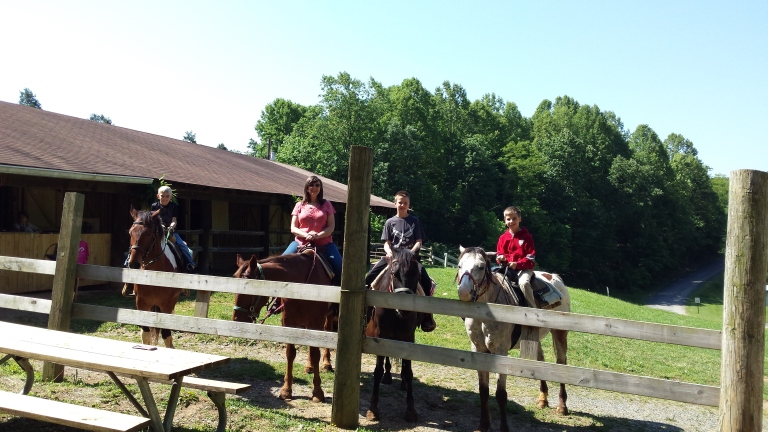 It was so enjoyable to ride up and down those wooded hills!  For that 90 minutes I was George Washington on Nelson, Agba on Sham, Ralph Moody on Lady!  Forget the fact that these horses never went faster than a crawl, it was a real rush to me!  Good times, for sure!

So there you have it.  The excitement of our next destination had us giddy…the Smokies!